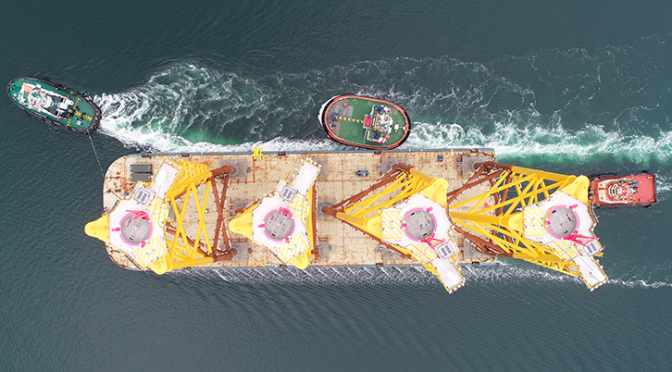 The first four structures left the Navantia shipyard in Fene (A Coruña) on Wednesday for their destination, off the coast of Brittany, France

•    The contract, the largest to date for Navantia-Windar in offshore wind energy, means more than 1,000 jobs in Galicia and Asturias

•    The Saint-Brieuc wind farm, with almost 500 MW, will be Iberdrola’s first major offshore wind site in France and the company’s fourth offshore wind farm in operation

Iberdrola has started on Wednesday the transfer of the first offshore wind platforms (jackets) for its Saint Brieuc wind farm, in Brittany, France, from the Navantia Seanergies shipyard in Fene (A Coruña), where the Navantia-Windar consortium is building these structures to support the wind turbines.

These are the first four of a total of 62 platforms at the facility, which will be the Iberdrola group’s first major site for this technology in France. The contract for its construction was also the largest order to date for the Navantia and Windar partnership in offshore wind power.

The structures will be transported on a 122-metre long barge belonging to the Van Oord company. They are expected to arrive at their destination in the port of Brest (France) in approximately three days, depending on weather conditions, during which time they will cover the more than 1,500 kilometres that separate the port of Ferrol from their location in the English Channel.

The delivery of the first platforms demonstrates the successful completion of the contract signed two years ago, valued at 350 million euros. The order included the manufacture and assembly of the 62 structures at Navantia Windar’s facilities in Brest and Fene, as well as the piles that anchor the wind turbines to the seabed at Windar’s facilities in Avilés.

This agreement has strengthened a relationship of more than eight years between Iberdrola and Navantia-Windar. Both companies have contracts worth more than 1,000 million euros, including the award to Windar of the transition parts for the Baltic Eagle offshore wind farms in Germany and Vineyard Wind 1 in the United States, as well as the orders already completed for Wikinger, in the Baltic Sea, and East Anglia One, in the United Kingdom.

In addition, this collaboration has contributed to making Navantia Seanergies, the brand created by Navantia to boost its business in green energy, a global benchmark in the construction of offshore wind components and the leading supplier of this type of structure in France, with one of the greatest development potentials in this industry in Europe.

The project gives continuity to the employment of Navantia and Windar in their respective facilities, as it means the generation of 1,250 direct jobs in Avilés and Fene. In addition, as a result of this contract, Navantia-Windar has opened a plant in Brest, France, where the 186 stabbings and intermediate platforms of the transition pieces have been manufactured, as well as the lattice structure for 34 of the 62 structures of the wind farm, generating 250 jobs.

The construction of the Saint-Brieuc wind farm will generate more than 1,500 jobs in France, distributed among various companies in the country (including 250 at the Navantia-Windar Brest plant). In total, this means the creation of at least 2,750 jobs between the two countries.

The Saint-Brieuc platforms stand on three legs. Each is up to 75 metres high, 25 metres wide and weighs 1,150 tonnes. Iberdrola has for the first time used an innovative hydraulic device called pile grippers to fix these structures, which provides additional fixation and stability during the installation phase, which is expected to begin in the coming months.

Saint-Brieuc will be the Iberdrola group’s first large offshore wind farm in France. With almost 500 MW of capacity, it will generate enough clean energy to meet the electricity consumption of 835,000 people, once it comes into operation in 2023.

Located some 16 kilometres from the coast, it will cover an area of 75 square kilometres. Its construction involves an overall investment of around 2.5 billion euros.

This new facility demonstrates Iberdrola’s commitment to the French market, where the company plans to invest around 4 billion euros by 2025, mainly in renewable projects.

Offshore wind energy is one of the keys to Iberdrola’s growth. Just as the group was a pioneer in its commitment to onshore wind power two decades ago, the company is leading the development of offshore wind power.

Iberdrola has a portfolio of projects in the United States, the United Kingdom, Germany, Poland, Sweden, Ireland, Taiwan, Japan, the Philippines and Brazil, which could increase in the coming years thanks to the numerous auctions in which it is participating.

The Iberdrola group’s sustainable growth strategy based on promoting the electrification of the economy through investment in renewable energies, electricity grids and energy storage has enabled it to become a global energy leader and the first in its sector in Europe by capitalisation, with a stock market value of around 70,000 million euros.

Navantia Seanergies is the division created by Navantia to contribute to the development of green energies, through the construction of elements for offshore wind farms and the development of hydrogen as an energy transport vector. Navantia Seanergies, which was born from the synergies with the other divisions of the public shipbuilding and high-tech systems integration company, is a provider of all types of solutions in platforms for offshore wind farms and substations and represents a solid industrial ally, with proven experience, innovation capacity, modern facilities and a consolidated value chain at the service of the energy transition.

Navantia has a solid track record in the offshore wind energy sector. Since 2014 it has participated in a total of 11 projects worth almost €1 billion, has manufactured, in alliance with Windar Renovables, more than 100 offshore wind platforms (jackets) and was the first Spanish company to build a substation for an offshore wind farm. Navantia Seanergies is thus positioned to become a global supplier of reference in a market that will grow by 13% until 2030.

Windar Renewables is a global leader in clean and sustainable energy through the manufacture of platforms and towers for the offshore wind industry, as well as towers for onshore wind farms. Led by its founding team, it has a network of manufacturing facilities strategically located to serve the world’s largest wind markets. It has production centres in Spain (Asturias, Galicia and Andalusia), India, Brazil and Mexico. The manufacturing capacity of all available solutions, the controlled quality of its products and innovation have earned it the trust of the main players in the renewables sector, which is reflected in a solid order book for the future. Windar Renovables’ business model is based on distinguishing itself through innovation and offering its customers comprehensive and tailor-made solutions, thanks to its capacity and flexibility, and always applying sustainability criteria.