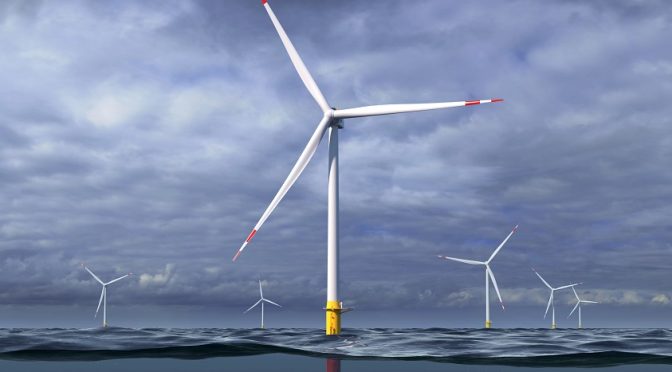 Would dramatically expand potential of US offshore wind resources to more than 7,000 TeraWatt hours (TWh) per year, nearly double the total annual US energy consumption of 4,000 TWh.

GE researchers unveiled details of an ongoing two-year, $4 MM project through the ARPA-E’s ATLANTIS (Aerodynamic Turbines Lighter and Afloat with Nautical Technologies and Integrated Servo-control) program to design and develop advanced controls to support a 12 MW Floating Offshore Wind Turbine. GE is partnering on the project with Glosten, one of the leading design and consulting firms in the marine industry, and the developer of the PelaStar tension-leg platform floating wind turbine foundation.

The Floating Wind Turbine project is one of several cutting-edge energy technologies GE Research is featuring at the annual ARPA-E Innovation Summit, which is being held virtually this year from Monday, May 24-27.

Caption: An artist’s rendering of the 12 MW Floating Wind Turbine concept GE Research and Glosten are designing as part of their ATLANTIS program project with ARPA-E. Image credit: Glosten

Rogier Blom, a Senior Principal Engineer in Model-Based Controls and the project’s principal investigator, says the enormity of building a floating platform that can support a structure as massive as an 850+ ft. offshore turbine cannot be understated, stating, “Designing a floating turbine is like putting a bus on a tall pole, making it float and then stabilizing it while it interacts with wind and waves. Doing this well is both a design and controls challenge.”

“Through our ATLANTIS project with ARPA-E, we will be concurrently designing the controls system with the design of the floating structure itself to advance Floating Offshore Wind Energy toward becoming a future commercially viable solution.”

Accelerating the development of new technologies to promote the future of floating offshore wind energy is the key objective of ARPA-E’s Atlantis program. By coupling a 12 MW GE turbine with Glosten’s tension leg platform technology, the team has taken on the challenge of designing a light-weight Floating Turbine with up to 35% less mass in the tower and the floating platform. This is expected to result in a very significant reduction of the resulting Levelized Cost of Energy – LCOE – of the electricity generated with this turbine. The core principle that makes this possible is co-designing the controls system with the tower and floating platform.

Ben Ackers, Vice President and Principal in Glosten’s Ocean Engineering and Analysis group commented on the collaboration between GE and Glosten. “We excel when we engage across all of the active disciplines and components as we optimize our floating structures for a full system solution. Collaborating closely with GE gives us another layer of detailed engineering design input beyond the standard drivers of site conditions, construction cost, schedule, and the resulting LCOE. This is the cooperation needed to bring floating wind to technical and commercial success.”

Between GE Research and Glosten, the joint research team brings decades of expertise in all areas of technology involved in carrying out the mission of our project, including turbine controls, structures, aero engineering, naval architecture, and hydrodynamics.

According to the National Renewable Energy Lab (NREL), the introduction of floating turbines would dramatically expand the potential of US offshore wind resources to more than 7,000 TeraWatt hours (TWhs) per year, nearly double the total annual US energy consumption of 4,000 TWh.