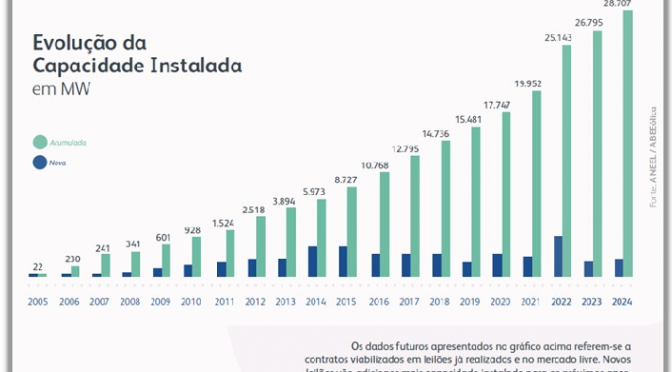 The February 2021 data from ABEEólica show that the country already has more than 8,300 wind turbines in 695 wind farms.
Wind energy has just reached the 18 GW mark of installed capacity, 10.3% of the national electricity matrix. According to data presented by the Brazilian Wind Energy Association, there are 695 wind farms and more than 8,300 wind turbines. A decade ago, the segment still had less than 1 GW of capacity and today it is the second largest, only behind the hydroelectric plant, which has 58.7% of the installed park in the country.

“Exactly ten years ago, in 2011, we had less than 1 GW of installed capacity and here we are celebrating 18 GW in early 2021. It is an impressive feat, a result not only of good Brazilian winds, but also of an industry that has dedicated to building factories, bringing in and implementing new technologies and that has become very competitive ”, explains Elbia Gannoum, president of ABEEólica.

The organization points out that in record days the source has already served up to 17% of the country throughout the day. The forecast is that by 2024, considering only the auctions already carried out, the source will advance to around 28 GW. But ABEEólica continues, these numbers should be higher, because they do not fully capture the performance of the free market, which will add to these values ??as new contracts close.

“It must be remembered that from 2018 to 2020 the ACL was responsible for a larger contract than the ACR in the case of wind farms,” ??Elbia details.

“However, we have to consider that wind energy is going through a moment of expansion in the free market and this usually makes a big difference for the sector, being able to balance the lack of demand in the regulated market. And, even in regulated auctions, even if they are smaller, we know that wind farms tend to play an important role due to their competitiveness and because of what the PDE 2029 indicates ”, analyzes Elbia.