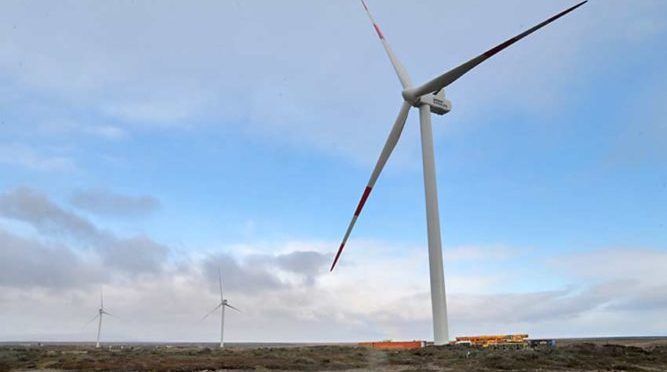 The three wind turbines can deliver up to 10.35 MW of power to the system, thus helping Magallanes go from 2% to 18% in the use of Non-Conventional Renewable Energies in its energy matrix.
Successfully concluding an intense period of technical tests, this Friday, October 16, the new Vientos Patagónicos wind farm officially came into operation, an initiative promoted by ENAP in conjunction with Pecket Energy.

Located in the Cabo Negro industrial complex, the wind power plant is made up of 3 wind turbines with a maximum height of 122 meters, which, together, can inject up to 10.35 MW of power into the Punta Arenas electrical system, which translates into in energy for about 15 thousand homes. “We are very happy, because we started up our wind farm. Now, with the Magellanic winds, we can serve 15% of the residential electricity consumption of the city, therefore, this is going to be an important contribution of renewable energies in the region ”, highlighted the general manager of ENAP, Andrés Roccatagliata.
And it is that within the benefits that they imply for the region, they are increasing the participation of Non-Conventional Renewable Energies (NCRE) from a current 2% to 18%; and reduce the emission of greenhouse gases and particulate matter, thus improving the well-being and quality of life of the inhabitants of the southern part of the country.

The total investment of the project exceeds US $ 22 million, of which US $ 5 million were contributed by the Regional Government of Magallanes.
After entering into operation, between the months of October and February 2021, which are the highest winds in the area, it is expected to refine and adjust the operation to achieve the optimization of the park and its integration into the Punta Arenas electrical system.