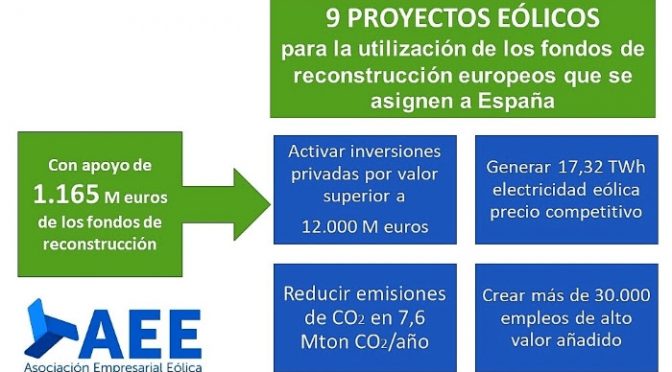 The Spanish Wind Energy Association (AEE) has developed a set of proposals focused on reactivating the economy in an agile and efficient way, and at the same time advancing the decarbonisation objectives of the European Green Pact and the Paris Agreement. The document consists of specific programs for the use of European reconstruction funds assigned to Spain, which would create more than 30,000 jobs and enable private investments to be activated for more than 12,000 million euros.

The Government presented yesterday (October 7) the Recovery, Transformation and Resilience Plan of the Spanish Economy, a roadmap for the recovery and modernization of the Spanish economy and access to European funds allocated to Spain for reconstruction after the crisis of the coronavirus.

The wind sector is positioned as one of the sectors that offer multiple underlying benefits for the society and the economy of the country in the short term, being an industrial and technological vector to advance economic reconstruction within the path of the energy transition effectively with a tractor focus for other sectoral activities.

PREPA’s proposal includes nine tractor projects on a national scale that, with the support of 1,165 million euros from reconstruction funds, would enable private investments worth more than 12,000 million euros, generate 17.32 TWh of wind electricity (equivalent to 30% of the increase in wind generation foreseen in the PNIEC), reduce CO2 emissions by more than 7.6 M Tons of CO2 / year (7.5% of the reduction in emissions foreseen in the PNIEC) at a cost of incentive per ton of CO2 reduced of € 6 ton / CO2. (The current cost being € 27 / tonCO2, and the expected one in 2030: € 42 / tonCO2), and creating more than 30,000 jobs with high added value.

The proposal contains, among others, a program for the repowering of wind installations, storage projects in wind farms, deployment of wind installations in extra-peninsular systems to achieve savings in the cost of electricity generation and boost the local economy, projects focused on offshore wind energy, development of experimental hubs in onshore and offshore wind energy, as well as plants for obtaining renewable hydrogen generated with wind electricity.

At this time, there is a unique opportunity for Spain to reactivate the economy and advance in decarbonisation thanks to renewables. With the appropriate regulatory framework finally approved, and the unison support of the political forces both at the national and regional levels, the objectives of the PNIEC and the reactivation of the economy in a sustainable key can become a reality. The wind sector is committed and ready to do its part in this collective effort that our society has before us.

Investment in renewable energy represents a great opportunity for Spain to take advantage of the new instruments available to advance its energy transition and for the wind industry to promote the deployment and development of its projects.

Wind power is the leading electricity generation technology in Spain, being the first technology in installed power and the second technology in electricity generation, with a coverage of more than 20% of electricity demand. We are the country in the European Union that installed the most onshore wind power last year, 15% of the total in Europe, which continues to keep Spain in 5th position in the world ranking of installed power with 25,704 MW, and 3rd in the ranking of exports. A sector that contributes 0.31% to GDP, employs more than 24,000 people, and is prepared to offer creative solutions to the challenges of the future.