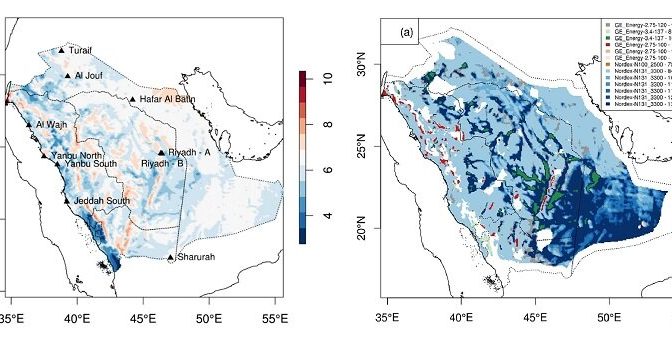 Key construction milestone crossed with delivery of 20 wind turbines for Kingdom’s utility-scale wind farm in Al-Jouf. Kingdom’s renewable energy sector could create up to 750,000 jobs over the next decade, say business leaders.

Saudi Arabia has moved a step closer to becoming the Middle East’s pace-setter in green energy and sustainability, with the delivery of the first consignment of turbines for a 400-megawatt wind-power plant.

Saudi Arabia’s first utility-scale wind-power source, Dumat Al-Jandal is being developed by a consortium led by EDF Renewables of France in partnership with Abu Dhabi-based Masdar. Once operational, it will the largest wind farm in the Middle East.

Construction work commenced last August and commercial operations are due to start in the first quarter of 2022. Masdar and EDF Renewables respectively own 49 and 51 percent of the Dumat Al-Jandal project.

“We are proud to be among the first contributors to the Kingdom’s clean energy transition, working in collaboration with Nesma Holding,” said Yousif Al-Ali, executive director of Masdar. “When operational, Dumat Al-Jandal will displace 885,000 tons of carbon dioxide each year, while generating electricity to power 70,000 homes.”

The turbines comprise towers, blades and nacelles, which will be assembled at the project site, 900 kilometers north of Riyadh in the Al-Jouf region. The project will include 99 Vestas wind turbines, each with a hub height of 130 meters and rotor diameter of 150 meters.

Vestas, which has over 40 years of experience in the wind industry and 115 gigawatts of installed capacity worldwide, brings expertise to support the region in its transition to a decarbonized and decentralized energy system.

“Saudi Arabia is ready to make that transition and to become a beacon of green energy and sustainability for the rest of its neighboring countries to follow suit,” said Muhamed Bou-Zeid, general manager of Vestas Middle East and North Africa.

He described the delivery of the first batch of wind turbines as a major milestone in Dumat Al-Jandal’s development as well as in Saudi Arabia’s National Renewable Energy Program.

“The ongoing progress at the wind farm site has largely been made possible by the Kingdom and its governmental authorities, which have graciously and wholeheartedly supported the consortium under the auspices of the National Renewable Energy Program,” he told Arab News.

The Renewable Energy Project Development Office of Saudi Arabia’s Ministry of Energy awarded the project to the EDF Renewables-Masdar consortium in January 2019 after a competitive tender.

Its tariff of $21.3 per megawatt-hour (MWh), the lowest bid submitted, was reduced to $19.9/MWh at financial close, making Dumat Al-Jandal the most cost-efficient wind-energy project in the world.

“Not only will Dumat Al-Jandal provide power to support the Kingdom’s economic growth plans, but it will deliver valuable employment, training and economic opportunities to Saudis, especially in Al-Jouf,” Al-Ali said. “The project will advance Saudization goals of employing Saudi nationals and leave a positive impact on Al-Jouf.”

Materials for the farm will be bought locally, creating employment and training opportunities for Saudis to develop expertise and technological knowledge. “In this way, the project will help accelerate the Kingdom’s transition to a knowledge-based economy,” he added.

According to the US-Saudi Arabian Business Council, the development of Saudi Arabia’s renewable energy sector could create up to 750,000 jobs over the next decade, as the Kingdom pushes to generate 7 percent of its total electricity output from renewables by 2030.

It will also benefit from a 20-year power purchase agreement with the Saudi Power Procurement Company, a subsidiary of the Saudi Electricity Company, the Kingdom’s power generation and distribution company.

Renewable energy projects, including wind and solar, are planned across more than 35 parks in Saudi Arabia by 2030. “The Kingdom is blessed with an abundance of energy sources such as wind, sun and fossil fuels,” Al-Ali said.

“Such a diversified supply of energy can be used strategically to generate significant returns. For example, if solar and wind energy technologies can be used to generate electricity, the Kingdom can benefit by using fossil fuels in other applications that enhance economic performance.”

The project is aligned “perfectly” with the Kingdom’s Vision 2030, as it would significantly increase the contribution of renewable energy within the country’s overall energy mix and foster diversification of energy resources, Al-Ali said.

“As a key project under the King Salman Renewable Energy Initiative, it is playing a crucial role in diversifying Saudi Arabia’s power mix sustainably,” he said. “The wind farm reflects our strong partnership with the private sector and the commercial viability of wind energy. This enables us to establish a competitive renewable energy sector in the Kingdom while reducing our carbon emissions in line with Vision 2030.”

Masdar continues to advance strategic projects to support the country’s renewable energy sector. At the beginning of 2019, the organization had set a target of doubling its renewable capacity — then at 4 gigawatts — within five years. With key projects such as Dumat-Al Jandal, it now expects to exceed that target before the end of 2020 ­— that is, within two years.

“There is no doubt that the Saudi market is one of the most important, not only in the region but globally,” Al-Ali told Arab News. “The Saudi market is highly attractive to clean energy developers because it is characterized by sufficient flexibility and attractive policies, which let developers submit competitive tenders and bids.”

Masdar has submitted proposals for other solar and wind-energy projects across Saudi Arabia, he said. “This reflects our commitment to the Saudi market and our confidence in the Kingdom’s ability to become a hub for large-scale renewable energy projects that are commercially viable.”