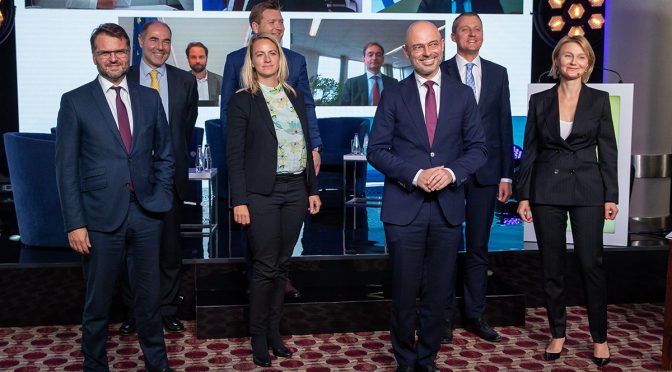 At an Offshore Wind Conference, hosted by the Polish Wind Energy Association (PSEW), high-level representatives of eight Baltic Sea countries and the European Commission signed a joint declaration to accelerate the build-out of new offshore wind capacities in the Baltic Sea.

Among the signatories of the Baltic Sea Offshore Wind Declaration are Poland, Germany, Denmark, Sweden, Finland, Lithuania, Estonia and Latvia. The countries jointly commit to the expansion of offshore wind energy in the Baltic Sea. They want to foster mutual collaboration in the context of the Baltic Energy Market Interconnection Plan (BEMIP).

This collaboration will include questions of hybrid offshore wind projects, smart grids, energy system integration and digitalization. According to the Declaration, the countries will also develop coordinated approaches to maritime planning, taking into account other uses of the sea space and environmental protection.

“Today’s Declaration marks another milestone for the energy transition in Poland and in the whole Baltic region. Governments put faith in Europe’s cheap, efficient and reliable offshore wind technologies. They acknowledge that wind energy can be a motor of Europe’s recovery from COVID19, ensuring long-term growth and jobs. The collaborative spirit of today’s declaration should also feature in the EU Offshore Renewable Energy Strategy”, said WindEurope Deputy CEO Malgosia Bartosik.

The declaration says that offshore wind energy production is “essential” in reaching national and international climate and energy targets. In its scenarios for a climate neutral Europe by 2050, the European Commission wants to increase offshore wind from 23 GW today to up to 450 GW.

Today, most of Europe’s offshore wind capacity is installed in the North Sea. According to WindEurope scenarios, the North Sea will remain the core of European offshore wind installations with 212 GW of capacity by 2050. But the Baltic Sea could host 93 GW by 2050, up from today’s 2.2 GW. The economic chances linked to this expansion are massive.

The event marked the first official appearance for MHI Vestas CEO Philippe Kavafyan in his role as newly elected WindEurope Chair. With regards to the prospects of offshore wind, Philippe Kavafyan said: “Collaboration among Baltic Sea countries will be key to unlocking the 93GW potential of offshore wind energy by 2050. Attending in person, here in Stettin, the signing of this historic Baltic Sea Offshore Wind Declaration gives me great confidence that there is a real commitment from governments around the Baltic Sea to work together, at the regional level, on an ambitious plan covering maritime spatial planning, infrastructure investments and the just transition of the workforce.”

“Poland can build a new sector of the economy around its emerging wind industry and become specialised in manufacturing of selected components of offshore turbines. We hope for offshore wind to become Poland’s primary export industry, and for Polish companies to be strong links in the international supply chain for offshore wind”, said Kamila Tarnacka, Deputy CEO of PSEW, representing the Polish wind energy sector.

The BEMIP High-level Group is now tasked to operationalise the Baltic Sea Offshore Wind Declaration. The group will draft a work programme for offshore wind development in the Baltic Sea that takes national policies set out in the National Energy and Climate Plans as well as EU policy developments into account. The presentation of this programme is planned for the first half of 2021.