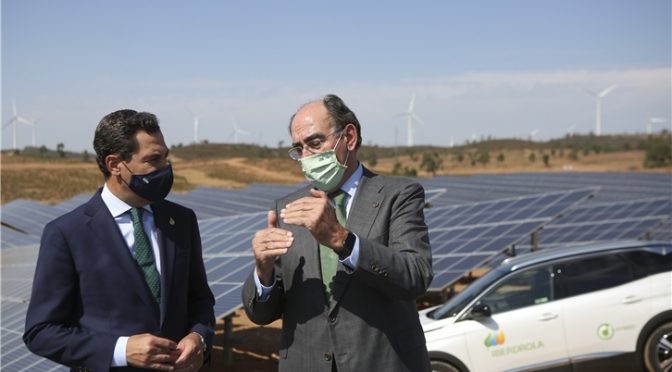 Iberdrola has this morning inaugurated the Andévalo photovoltaic plant, a ground-breaking facility that paves the way for a more sustainable energy and production model.

Iberdrola Chairman, Ignacio Galán, accompanied by the president of the Andalusian Parliament, Juanma Moreno, explained that “Andévalo is an example of the operations we are undertaking in Andalusia to triple our renewable potential in the region to 3,000 MW over the next 5 years”.

This new plan represents an investment of nearly €1.5bn and will allow for the creation, in the construction and assembly works alone, of 5,500 new jobs in the region. Iberdrola is currently the top wind power developer in the region, with an installed renewable capacity of 900 MW.

Andalusia thus becomes one of the largest growth centres for Iberdrola in Spain, where the company already leads in the generation of clean and green energy, and where it plans to double its installed capacity over the coming five years, thereby contributing to the energy transition and the creation of jobs in Spain. “This is Iberdrola’s commitment: to drive a clean, safe and efficient energy transition and unite forces to accelerate a green recovery that leaves no-one behind”, he explained.

Located in the municipality of Puebla de Guzmán, in Huelva, the Andévalo photovoltaic plant consists of 150,000 photovoltaic panels and will avoid the emission of 15,000 tons of CO2 into the atmosphere every year. The installation forms part of the largest wind power complex in Western Europe – Andévalo (292 MW) – developed and managed by Iberdrola since 2010, and during its construction it has generated activity and employment for local firms, such as the Huelva company Mebi, Áridos Mengíbar of Jaén, and System Melesur and CEMOSA of Málaga.

At Andévalo, Galán stressed that “the energy transition is the best way forward towards a more sustainable and healthy society, promoting responsible consumption and the circular economy and generating quality and lasting local employment”. It is, moreover, “a unique opportunity to drive growth and well-being in Andalusia and also in Spain as a whole”.

“To make the most of it,” said the Iberdrola chairman, “we need to attract large volumes of private investment. And that requires a long-term countrywide strategy, such as that defined by the National Integrated Energy and Climate Plan, as well as to create confidence”.

Galán reiterated that “the financial crisis is affecting all the countries in the world and the solutions are the same – more investment, greater productivity and increased stability and legal and institutional security.

“But we must hurry”, he insisted. “Because investing in infrastructure like Andévalo means creating the growth and employment that we need, at the same time as building a better and more efficient country for future generations”.

“It is up to us to be able to face the challenge of a quick and inclusive green recovery”, he explained. “Now, more than ever, we must accept the fact that building a better future for all is everyone’s responsibility. We are going to leave an unprecedented public debt for future generations and we have the moral obligation to also leave them a better Spain”, he stressed.

Andalusia is and will continue to be one of the main stages for Iberdrola’s commitment to sustainable growth: a region with which it shares “the conviction of finding ourselves facing an unprecedented opportunity”, Galán continued. In the region, Iberdrola supplies power to a population approaching one million people, has some thirty electricity power stations in seven of the eight Andalusian provinces and a total economic impact approaching €600m a year.

The inauguration of the photovoltaic plant brought together all those who have collaborated to make it possible: local suppliers, employees, customers and institutions. Galán highlighted the collaboration with the Andalusian Parliament which made it possible to finalise the construction of Andévalo in scarcely eight months, despite the pandemic.

On the occasion of the inauguration of this new facility, which will make it possible to completely decarbonise the energy consumption of Heineken’s four production plants in Spain and its offices, Iberdrola chairman underlined that “we share with Heineken not only the colour green, but also the environmental commitment that they show as leaders in the brewing sector”.

The alliance of both companies began to come together some years ago, and has spread to other countries, including Mexico and Brazil. From now on, millions of Heineken consumers in the country will have access to products made completely with competitive solar energy as a result of the long-term Power Purchase Agreement (PPA) reached by both companies.

With Andévalo, Heineken España becomes the first Spanish brewery to make all its beers and ciders with 100 % renewable electricity, getting closer to the objective of being a zero-emissions brewery by 2025.

On this note, Guillaume Duverdier, the chairman of Heineken España commented that: “the sun is the new secret ingredient for the beers in the Heineken family. Our beers produced with the power of the sun contribute to regenerating the environment, using a source of richness that promises us millions of years free from emissions. A unique natural resource which in Spain offers us more than 600 times the energy we consume and represents an essential element in the culture, character and colour of the social life of the Spanish people. Because we are all winners in the fight against climate change: nature wins, and the economy wins”.

Iberdrola is confident that electrification and the green economy will act as a lever for change in the post-Covid world. This is why the company has speeded up its investments, with the aim of contributing to reactivating economic activity and the creation of jobs.

This commitment to a green recovery has led the group to make record investments of €10bn this year – more than double those of the past – in renewable energy, smart grids and large-scale storage systems, having earmarked €100bn for these areas since 2001 throughout the world.

So far this year alone, Iberdrola has placed forward orders with suppliers for more than €9bn giving them the necessary forward planning to retain the more than 400,000 jobs that depend on its activities throughout the world, of which 85,000 are in Spain.

Iberdrola currently operates 32,700 renewable MW at the global level – over 16,600 MW in Spain – making its generation facilities among the cleanest in the energy sector, and it has a renewable projects portfolio of over 58 GW.