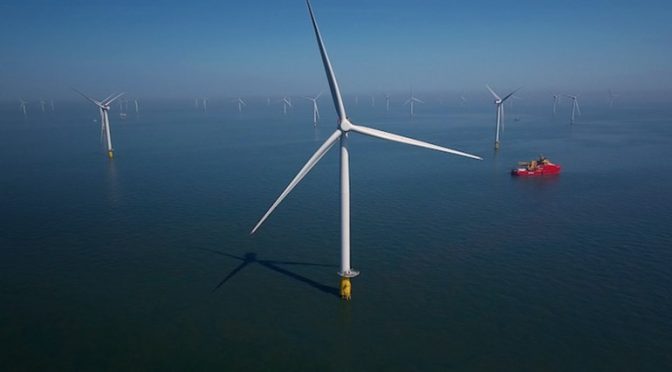 The United States offshore wind energy industry is growing, with planned commitments to build 26 gigawatts (GW) of offshore wind projects along the East Coast from now through 2035. This is the clean power equivalent of 26 nuclear power plants, or roughly 10 times the average electric energy used by the entire state of Delaware.

Marshalling ports, large waterside sites with the acreage and weight-carrying capacity necessary to assemble, house and deploy the huge wind turbines ready to ship out into the ocean, will be critical to meeting this current and committed demand for offshore wind.

Yet few viable port sites exist along the East Coast that have clear overhead access from port to sea to transport these large turbines — each larger than the Statue of Liberty — and channels deep enough to accommodate the vessels that carry them. Those that do are small in area and will not be able to fully support the existing demand for turbine deployment. Nor will they be able to efficiently deploy turbines that are ever-increasing in size, as the industry starts to look beyond the 8 megawatt (MW) turbine to 12 and 15 MW.

A team of University of Delaware undergraduate students, advised by UD Professor Willett Kempton and energy policy analyst and doctoral candidate Sara Parkison, recently released a report identifying two ideal locations for a marshalling port in the Delaware Bay. The proposed locations include a Delaware site situated north of Delaware City near the Occidental Chemical Corporation, and a location on land transferred from the Army Corps of Engineers around Salem, New Jersey.

The UD students, most of whom graduated in May 2020, worked together for over a year to evaluate the viability and logistics of developing marshalling ports in the Delaware Bay to service the offshore wind sector, as part of the Office of Economic Innovation and Partnership’s Spin In program.

According to the UD report, both sites have the potential to service offshore wind projects as far north as Connecticut and as far south as the Carolinas, shoring up a critical link in the offshore wind production capability. Each location is large enough to build a port capable of deploying over 500 MW of clean energy annually, with ample potential to expand.

The UD report comes on the heels of a recent announcement by New Jersey Gov. Phil Murphy about the Garden State’s plans to begin developing an offshore wind deployment port in Salem in 2021. The announced New Jersey “Wind Port” is nearly identical to one of the two sites previously identified by Kempton and analyzed by the Spin In team.

“It’s exciting to see New Jersey take this huge step forward in clean energy,” said Kempton, associate director and co-founder of the Center for Research in Wind (CReW) and a professor in UD’s College of Earth, Ocean and Environment.

However, even with the announced marshalling port in southern Jersey, the UD report shows it is likely not large enough to meet market demand for offshore wind energy by 2025. Based on existing power purchase contracts and projected demand, the Spin In team’s analysis indicates that the wind industry will require over 2000 MW of deployment annually for the region beginning in 2022 and 2023. This will outpace the deployment capabilities of current and planned marshaling facilities, even with the New Jersey port.

An additional marshalling port in Delaware could provide a way forward, enabling the Delaware Bay to meet projected demand for wind power along the East Coast over the next 15 years, the researchers said. The Delaware site is already zoned for industrial use and equipped with roads and railways, a plus for access of workers and materials.

How marshalling ports work As offshore wind turbines have grown in their capacity to provide clean energy, from an average 3 MW to the current 15 MW designs, so has their size. To build a 500 MW wind project in a year with today’s 15 MW turbines requires about 50 acres for movement, storage and assembly.

To build and maintain offshore wind power projects also requires skilled people, large components and specialized installation vessels and marshalling ports. According to Kempton, the idea is to lay out all the wind turbine components in the marshalling port as items arrive on-site. Then, when all the parts are present, they can be partially assembled, loaded on special installation ships, transported and installed in an offshore wind farm.

It’s a big job, as some turbine components can weigh more than 3,000 tons and each of the turbine’s three blades measures 360 feet (110 meters) long. For comparison, the average blue whale (the largest mammal) weighs approximately 115 tons and is around 80-100 feet (24-30 meters) long.

Each turbine installation vessel would have a deck area equipped to carry two to four turbines. On the first trip, the crew would use a crane on the boat to lift the pilings (large pipes) off the port surface and transfer them to the offshore site, then pound them into the seafloor using a pile driver. On a second trip, the crew would transfer and install the remainder of the turbine using a crane on the boat. An animation of this process can be found on the CReW website.

In reviewing New Jersey’s proposed plan, Emma House and Emily Tulsky (both environmental engineering majors) called the site design “very good” but said alternative design options could include building the loading platform, or quay, off the more northern area of the location.

“The northern half of this area is the most protected from flooding and the most suitable for heavy loads in its current condition, so the land may take less time and effort to prepare for construction,” said House, who is currently pursuing her master’s in environmental engineering at UD.

Delaware currently does not have any offshore wind turbines, although the wind turbine installed at UD’s Lewes Campus has informed wind turbine technology while providing enough clean energy annually to power the campus and about 100 homes in the community.

Spin In program Nine students from various majors participated in the Spin In Wind Deployment Port team over the 18-month project, gaining a greater understanding of business demands and experience collaborating in teams. The students credited the interactive nature of the Spin In program and the intensive mentoring provided by Kempton and Parkison with preparing them to work directly and indirectly with various stakeholders, including developers, land owners, public officials, environmental regulators, industry and policy experts, engineers and designers and more.

OEIP Director David Weir said one thing that set this particular Spin In project apart is the impressive scope of work that the students undertook. “New Jersey’s action validates and underscores the quality of the students’ work,” said Weir. “It wasn’t just putting together a plan or technical report, it was a very detailed study that included hard core financial and technical work, coupled with interaction with the industry and policy experts, to define the best location to put this capability on the East Coast.”

Sarra Sundstrom (English and environmental studies) joined the project after visiting over a dozen offshore and nearshore wind turbines during a study abroad trip to Denmark. Denmark’s successful wind power infrastructure supplies about half of the country’s electricity needs.

“I see the global transition to renewable energies as both necessary and inevitable,” said Sundstrom.

“Our team was successful because we were on the same page about how much is at stake for the future, and the importance of taking action immediately,” Roy said.

It is unclear if a marshalling port in Delaware will come to fruition. So far, support for wind power in Delaware has lagged behind other states in the eastern U.S. However, Kempton and Parkison continue to pursue research and policy efforts that could allow a role for wind power initiatives in Delaware, including the Delaware City location identified as an initiative that would support East Coast states that develop offshore wind projects, with ample space to expand as industry demand increases.