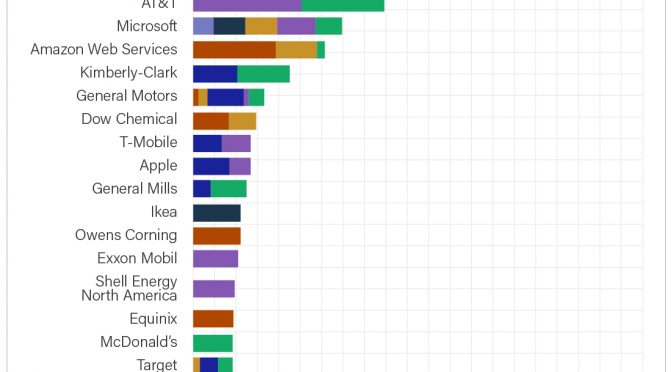 We have been harnessing the wind’s energy for thousands of years. But we’ve been using it to generate electricity for only the last few decades.

Initially, wind power was considered a science experiment at best.

Wind is cheaper than nuclear power, coal and, now, even natural gas.

Until 10 years ago, utilities were the only buyers of wind-generated electricity.

Since then, a few things have happened to change the demand for wind.

Many climate-conscious companies began to look for ways to reduce their carbon footprints. Replacing fossil fuel-generated power with renewable energy started to rise in popularity.

As it turns out, there were a lot of wind generators looking for more customers. And corporate America was looking to buy a lot of renewable energy.

It was a perfect match.

For the last five years, American businesses have been buying 20% of all new wind farm capacity installed in the U.S.

And that number is only going to grow. Wind-generated electricity is a bargain. Costs have fallen about 70% over the last decade. These lower prices have attracted a much more diverse group of customers.
For instance, back in 2015, technology companies made up 70% of new corporate wind investments. But in 2019, they were just 25%.

Telecommunications, food and retail customers have emerged as big buyers of wind power. Ball Corporation (NYSE: BLL) and McDonald’s Corporation (NYSE: MCD) both picked wind power for their first renewable power purchase agreements (PPAs) last year. (A PPA is a contract between a generator of electricity and the party purchasing electricity.)

PPAs are generally 15 to 20 years in length. The buyer gets flat-rate, renewable electricity at a bargain price.

Regular PPAs have one drawback: They require the buyer to purchase the power directly from the generating party.

But in 2013, virtual PPAs began to emerge. And these don’t require the buyer to buy the power directly from the generator.

Instead, a customer with a virtual PPA receives cash from the sale of the electricity on the open market. Virtual PPAs now make up about 85% of all wind power PPAs.

A Bright Future Ahead

U.S. wind farms are concentrated in the Midwest. About 61% of all corporate PPAs are tied to wind farms in Kansas, Oklahoma and Texas.

Everything is big in Texas, and wind energy is no exception. A full 39% of all wind sold to companies comes from Texas wind farms.

Besides strong winds, Texas boasts plenty of transmission capacity. And its retail and wholesale electric markets are unregulated.

That gives customers competitive choices when shopping for energy.

I expect American companies will increasingly switch to renewable power. I especially like the prospects for both onshore and offshore wind.

In the U.S., offshore wind is just getting started. It has a bright future ahead, and I’ll be sure to keep you updated on any exciting developments.