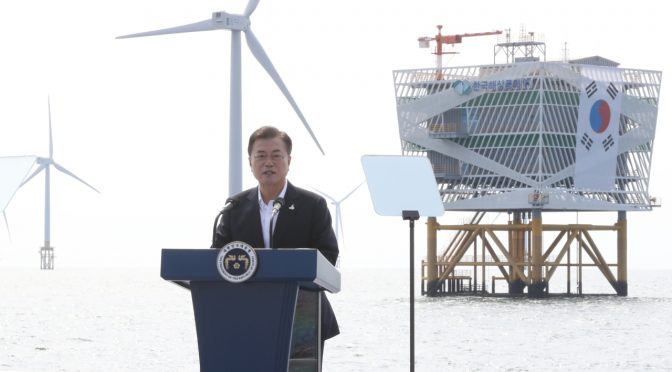 Moon visited a wind power plant and a turbine research center on the southwestern coast in his first field inspection since unveiling a “New Deal” policy Tuesday to recover from the economic downturn caused by the coronavirus crisis.

“The government’s goal is clear and is to become one of the world’s top five offshore wind energy powerhouses by 2030, taking advantage of our geographical advantage of being surrounded by water on three sides,” Moon said at the wind farm in Buan, about 280 kilometers southwest of Seoul.

The government aims to expand the nation’s offshore wind power capacity to 12 gigawatts by 2030 from the current 124 megawatts, he noted.

During his visit, central and local governments, businesses and local residents signed a memorandum of understanding to develop the plant located in two counties of Buan and Gochang, North Jeolla Province.

The governments seek to draw 14 trillion won ($11.61 billion) in private investment in the project to increase capacity from the current 60MW to 2.46GW by 2028.

The plant operating since July 2019 is the largest among the nation’s three offshore wind farms. Two others are located in South Jeolla Province and Jeju Island.

He projected the offshore wind energy industry would create up to ten times more quality jobs than other electricity generation sectors, and create new demand for the shipbuilding, steel and construction industries.

“The government will create initial demand through large-scale projects and continue to invest in technology development so that domestic companies can have competitive edge in both price and technology,” he pledged.

On Tuesday, the president laid out his New Deal plan, under which the government will invest 160 trillion won by 2025 in promoting green, digital and smart technology industries, which he projected to create 1.9 million new jobs.

Under the plan, South Korea will complete the construction of new wind energy plants with a combined capacity of 2.4 gigawatts (GW) by 2028, according to the Ministry of Trade, Industry and Energy.

The total budget for the project in North Jeolla Province is estimated at 14 trillion won (US$11.6 billion) and will be raised from the private sector.

The ministry said it will first carry out studies by building wind energy facilities with a combined capacity of 400 megawatts (MW) before beginning full-fledged construction in 2023.

When completed, the wind farms will be able to supply power to some 2.24 million households.

South Korea, which has been making efforts to reduce its consumption of traditional fossil fuels and instead use more sustainable resources, such as solar, wind and hydrogen, vowed to beef up its wind power industry and expand the capacity to 12 GW by 2030.

The goal is far above the country’s current capacity estimated at around 124.5 MW.

The ministry said the latest project has paved the way for the country to reach the target by 2030, as there are also several projects pending in other areas, including in an island town in Sinan, about 400 kilometers southwest of Seoul.

Earlier this week, South Korea unveiled its green New Deal, which centers on spending 73.4 trillion won to transform the nation’s fossil fuel-reliant economy into an eco-friendly one.

The projects could create around 659,000 jobs and help the country overcome the COVID-19 crisis and prepare for the post-coronavirus era to be led by the fourth industrial revolution, according to the ministry.