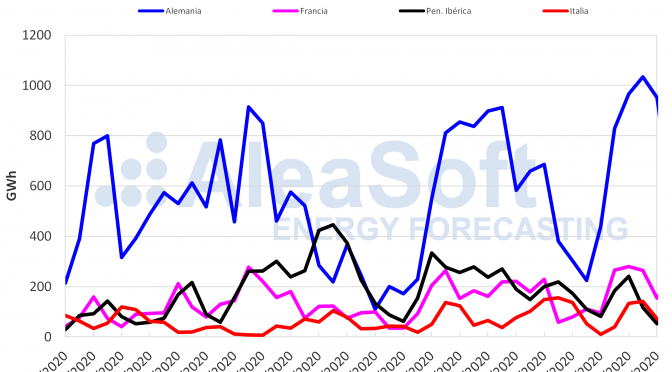 The variability of wind power is the main cause. In markets such as German and French, wind turbines production went up, while in the south of the continent it fell. On February 10 there was a record of instant photovoltaic production in Spain. In the fuel markets the bearish sentiment is maintained by the threat of the coronavirus.

In general, the solar energy production of the markets of Europe showed a uniform behavior during the first three days of this week, with decreases with respect to the average of the previous week. In the markets of France and Italy, daily production was growing from Monday to Wednesday, although the average production of those three days remained 12% and 4.6% below the average of last week respectively. In the case of the Iberian Peninsula and Germany, the generation with this technology was progressively falling and reached differences of -7.7% and -19% respectively.

Analyzing the first 12 days of February, it is remarkable that solar power production will increase in all countries. Germany continued to lead this comparison, with a 47% rise. In the Iberian Peninsula the increase was 12%, while in France and Italy there were similar percentage increases, close to 17%.

It is expected that once this week ends, weekly solar energy production will decrease in Germany compared to last week, and increase in Spain and Italy.

Wind energy production behaved heterogeneously so far this week. In the German wind farm market there was a significant increase of 96% compared to last week’s average. The other wind turbines markets where this type of production increased were French and Italian, 60% and 25% respectively, although in the Italian market if the production is compared with that of the same days last week, it was 15% more low. On the other hand, the generation with this renewable source in Portugal suffered a 57% drop.

Only in Germany and France increased wind power production from an interannual point of view during the days since February. These increases were 28% and 43% respectively. In Portugal the decrease was 28% and in Italy 3.5%.

At the end of this week, the same behavior of wind turbines production is expected to be maintained in most European markets. Production in Germany and France will be higher than last week, while that in Portugal and Italy will be lower.