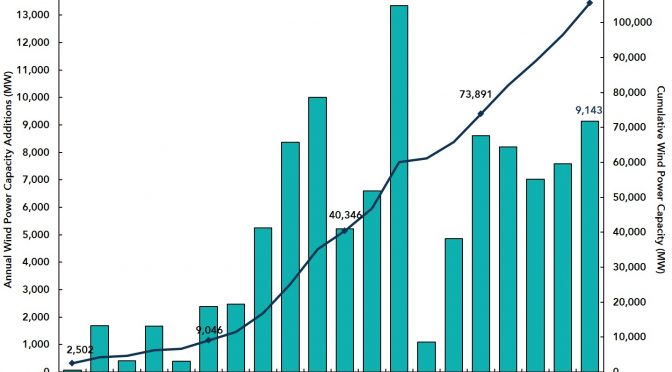 AWEA’s just-released Fourth Quarter Market Report gives a full look at 2019 for the first time, and for fans of wind there’s a lot to like. Last year was the third strongest year ever for new wind additions, and nearly 200 new wind projects are in the works. That means more reliable, affordable, clean electricity for millions of additional American families and businesses. On the whole, the U.S. now has enough installed wind to power over 32 million homes.

Let’s dig into the details:

The U.S. wind energy industry had its fourth strongest quarter on record, installing 5,746 MW of new wind projects in the last three months of the year. This brought installations for the year to 9,143 MW, the third largest year for new wind capacity additions and a 20 percent increase over 2018. There are now 105,583 MW of wind energy operating in the United States, with nearly 60,000 wind turbines spinning across 41 states and two U.S. territories.

Fifty-five new wind farms started spinning across 19 states last year. Texas and Iowa have long been the country’s wind energy leaders, and they held onto that mantle in a big way in 2019. Already the top two states for installed wind capacity, Texas added nearly 4 GW of new projects last year, and Iowa added over 1.7 GW.

For both states, those are new records for single year installations. Illinois, South Dakota, and Kansas rounded out the top five states for the year. Iowa is now the second state with over 10,000 MW of operating wind capacity, while Illinois became the sixth state with over 5,000 MW of wind.

Utilities and corporate customers continue to power up with wind, signing a record 8,726 megawatts (MW) of power purchase agreements (PPAs) in 2019. Corporate buyers accounted for 40 percent of the new PPAs signed in 2019. In fact, Walmart and AT&T were two of top three wind buyers last year. Meanwhile utilities signed 5,266 MW of wind contracts last year, the highest amount on record for this group.

Project pipeline: More wind is on the way

The pipeline of new wind projects under construction or in advanced development is 24 percent larger than it was at this time last year. Across 33 states, 191 different wind projects are now in the works, representing $62 billion worth of investments.

It was hard to keep up with all the big offshore wind announcements in 2019—six states up and down the East Coast announced 16,300 MW of new offshore wind targets. That more than doubled previous offshore wind commitments, which now stand at more than 25,000 MW. New Jersey put a capper on 2019 when Gov. Phil Murphy expanded the Garden State’s offshore goal to 7,500 MW by 2035.

Offshore wind projects now account for 17 percent of the development pipeline, totaling 7,483 MW, as more projects have been awarded contracts through state solicitations.

There’s no doubt 2019 was a banner year for American wind power, and we fully expect the positive momentum in all of these trends to carry on throughout 2020.