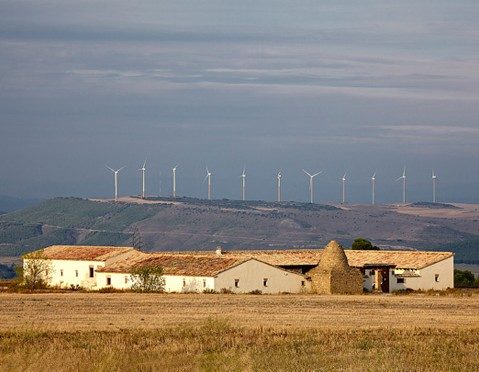 The Cavar wind farm, consisting of four wind power parks with a total capacity of 111 MW, will be operational in the first quarter of 2020. This new renewable project will allow the creation of up to 200 jobs during its construction. The wind energy project is being developed by Renovables de la Ribera, a joint venture 50% owned by Iberdrola and Caja Rural de Navarra.

The European Investment Bank, EIB, has taken a new step to promote the production of clean energy in Spain. The EU bank will provide 50 million euros of financing to Renovables de la Ribera, a 50% joint venture owned by Iberdrola and Caja Rural de Navarra, with the aim of building a new renewable project, the Cavar Wind Complex, in Navarra, Spain

The EIB supports this project through a Green Loan, a type of financing whose characteristics fully comply with the requirements defined in its Climate Awareness Bonds program and is, therefore, capable of being allocated to its portfolio of operations of loans financed by issuing said Bonds.

The new project, located between the municipalities of Cadreita and Valtierra, will consist of four wind farms and will have an installed capacity of 111 megawatts (MW). Its construction will allow the creation of up to 200 jobs and is expected to be operational in the first quarter of 2020.

Thus, the financing provided by the EU bank to Renovables de la Ribera will contribute to meeting the objective proposed by the European Commission to generate 32% of the energy consumed in the EU from renewable sources in 2030. The The new wind complex, which will not emit any type of polluting emission, will generate enough clean energy to supply the electricity consumption needs of 46,500 people and prevent the emission of 84,000 tons of CO2 into the atmosphere per year.

Cavar is also the first wind project in Spain whose power generation will be sold to a large corporation: through a long-term bilateral contract -PPA, Power Purchase Agreement- will supply the production of 40 MW of clean energy to Nike in Europe.

The Vice President of the EIB, Emma Navarro, responsible for the climate action of the Bank, said: “Spain has great potential in renewable energy and the EIB wants to contribute to making our country a benchmark in this sector, facilitating investments that encourage the transition towards a low carbon economy and contributing, at the same time, to generating economic growth and employment, promoting the generation of clean energy is one of our top priorities, in its objective of consolidating itself as the EU Climate Bank, the EIB It has reaffirmed its willingness to increase its funding to support Europe in its plans to become the first emission-neutral continent in 2050 ¨.

For his part, Ángeles Santamaría, CEO of Iberdrola Spain, has stressed “the relevance of having climate finance instruments to accelerate the energy transition we need. These measures, together with the establishment of emission targets and the implementation of an industrial and fiscal environmental strategy, will allow us to advance in the decarbonization of our economy and the mitigation of global warming. Aligned with this commitment and with an ambitious action plan, Iberdrola is moving forward with strong investments in renewables in Spain, where we expect the installation of 3,000 new MW until 2022 and up to 10,000 MW in 2030 ”.

For Caja Rural de Navarra, “participation in this renewable energy production activity is embedded in its axes of environmental responsibility and support for regional activity, collaborating in an action in rural areas, which combines traditional crops with new respectful ways of energy production ”.

The EIB and climate change action

The EIB is one of the largest multilateral financing providers worldwide to fight climate change. The Bank’s objective is to lead the mobilization of the necessary financing to keep global warming below 2 ?C and limit the temperature increase to 1.5 ?C in order to meet the objectives of the Paris Agreement. On November 14, the EIB Board of Directors approved its new climate objectives and the new energy lending policy: the Bank will gradually increase funding for climate and environmental objectives up to 50% in 2025, in order to that the EIB Group mobilize, until 2030, at least 1 billion euros to favor investments that contribute to achieving these objectives.