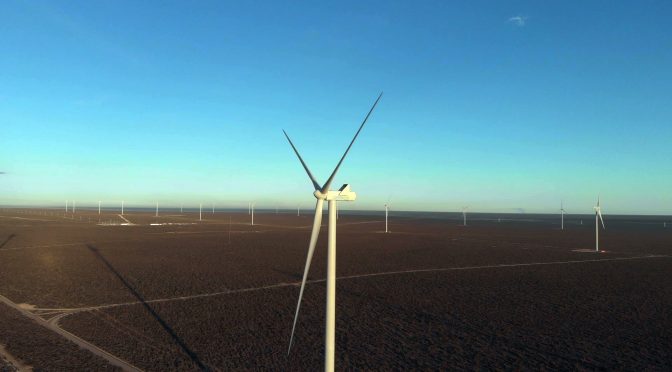 CAMMESA granted today the commercial authorization of the second stage of the Madryn Wind Farm. With this milestone, Madryn becomes the largest wind farm in Argentina.
The total investment amounts to USD 320 million. The total installed wind power is 222.3 MW. This wind farm reaffirms Genneia’s leadership, which has more than 40% of the wind share.
Wind energy will be evacuated through ET500, a work of which Genneia participated and has been operational since September 3.
The Madryn Wind Farm (PEM) is erected on a plot of more than 6,000 hectares on provincial route 4, in the province of Chubut; With its 62 wind turbines – 117 meters high and 60 meter long blades – there is clean energy produced for the Argentine Interconnection System (SADI), supplying the equivalent of more than 330,000 homes. These numbers make Madryn the largest wind farm in Argentina, one of the largest in South America and one of the most important projects for Genneia.

To develop this park, the company invested 320 million dollars, generating at the peak of the project more than 300 jobs and entrusted its technology to the Danish company Vestas, whose wind turbines transform Patagonia wind into green energy. The park has an average capacity factor of 51% and winds that blow at an average of 8.6 m / s, characteristics that will allow it to generate 987,000 MWh of energy per year and take care of the planet by avoiding the emanation of 495,000 tons of carbon at the atmosphere.

With the authorization of CAMMESA, today the second stage of Madryn was put into operation, which has a power of 150MW. The first, of 70 MW, began operating less than a year ago, on November 1. Genneia undertook the construction in stages and achieved its development in record terms for projects of these characteristics, complying with high international standards. The PPA was signed in May 2016, within the framework of Resolution 202 of the Ministry of Energy and Mining of the Nation and the Regime for the Promotion of Renewable Energies established by laws 26,190 and 27,191. In this way, the so-called Madryn Wind Farm has a total installed capacity of 220 MW.

This is Genneia’s fourth wind power asset in Chubut, where it operates the Rawson (108 MW), Chubut Norte (28MW) and Trelew (50 MW) wind farms; and projects under development for more than 160 MW. The so-called “Madryn Node” has a total installed capacity of 410 MW. The amount of Genneia’s gross investments in renewable energy in Chubut reaches 400 million dollars, and if the rest of the projects involving the provinces of Río Negro, Buenos Aires and San Juan are added, it reaches 1,000 million dollars in The 2018-2020 period.

During the first days of September the ET500 was put into operation, a very important work for Genneia because it allows the energy dispatch of the Madryn Wind Farm and the rest of Genneia’s wind assets in the province. The investment that led to the development of the ET500 amounted to 55 million dollars.

The construction, assembly and commissioning of the ET is a joint development of Genneia and the Goldwind company for Transener. From the beginning of this month, the 500 kV station began to be operated by Transener. The process included the energization of the new facilities, the 500/132 / 34.5kV power transformer bank of 600 MVA and its reserve phase, one of the largest equipment installed in the country.

Genneia is a leading company in the provision of sustainable energy solutions, which exceeds the horizon of 1,200 MW of power generation in Argentina. It has more than 40% of installed capacity in wind energy, which makes it the number one in the sector.

The company has more than 570 MW of wind power with its Rawson I, II and III, Trelew, Madryn I and II, Chubut Norte I and Villalonga I and II, Pomona I and II wind farms; and exceeds 660 MW of renewable energy, considering its solar parks Ullum 1, 2 and 3 (82 MW) in the province of San Juan.

In addition, it is building the Chubut Norte II wind projects (26 MW); Chubut Norte III (57 MW) and Chubut Norte IV (83 MW) in conjunction with Pan American Energy; the Wind Winds Park of Necochea in partnership with Central Atlantic Coast and a biomass plant in La Florida, Tucumán, for 19 MW.