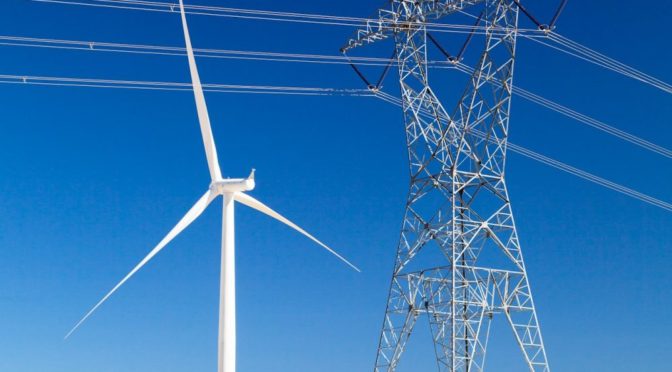 This morning Amy Farrell, AWEA’s Senior Vice President for Government & Public Affairs, gave the opening remarks at Politico’s Reinventing American Energy event. She focused on the need to update and expand America’s electric grid to meet 21st century needs, and explained why transmission expansion is at the heart of this effort. You can watch a stream of the event here, and Amy’s full remarks are below:

Thanks to Politico for convening an event on this very timely and important topic – modernizing America’s electric power infrastructure for a clean energy future.

AWEA is proud to sponsor this event.

A critical component of this modernization is expanding and improving our electric grid.

No matter your end goal— driving down electricity costs, improving resiliency and reliability, reducing carbon emissions, or making the U.S. more secure and economically competitive—modernizing the grid and expanding transmission is a common denominator.

This is a no-regrets down payment for future energy policies and future economic growth.

However, much of our power grid infrastructure – the transmission lines, towers, transformers and substation equipment – is outdated and long overdue for renovation.

Some of our transmission lines are over 100 years old. Think about that—we’re charging iPhones and powering smart TVs with infrastructure built when large portions of the country still didn’t have access to the electricity needed for a simple light bulb.

This neglect doesn’t position the U.S. to succeed in the competitive global economy.

And we are asking more than ever from our outdated system.

Imagine if the U.S. had a dozen or so separate internets that couldn’t communicate with each other.

In much the same way, the U.S. electric system is mostly balkanized into regional systems that are insufficiently connected to efficiently and cost-effectively share resources or support each other.

To ensure access to reliable, resilient and affordable power, we need a system that meets today’s needs.

Let’s start with the goal of providing low-cost, reliable power to consumers.

Wind is now the least expensive source of new electricity generation in many parts of the country and American consumers, utilities, Fortune 500 brands, cities and universities all want to buy wind power because its low, stable prices are good for the bottom-line

But large quantities of low-cost U.S. wind and increasingly affordable utility-scale solar resources can’t be harnessed due to inadequate transmission.

Connecting America’s world-class, low-cost renewable energy resources to the grid will save consumers money and have the added benefit of providing good jobs and economic investment in rural communities and a drought and flood proof cash crop for farmers.

But this isn’t just a story about renewables. Building more transmission will make the entire power supply more flexible and reliable. It will allow grid operators to more efficiently move power from where it’s generated to the towns, cities and manufacturing hubs where electricity demand is highest.

A robust and well-connected transmission system adds resilience. It gives grid operators access to a wider range of resources and operational flexibility to bounce back from extreme weather and unexpected power plant outages. It also makes the U.S. less susceptible to supply disruptions – you can’t stop the wind from blowing or the sun from shining.

The added affordability, reliability and resilience that will follow grid improvements provides the U.S. an economic boost as well.

Fortunately, we can make needed transmission improvements in a cost-effective way. Regions that have invested in transmission expansion over the last decade have seen extensive net benefits from more reliable and affordable electricity, yielding billions of dollars in consumer savings.

Dozens of studies from across the country show that transmission line investments pay for themselves many times over, and real-world examples bear this out:

But the vision of a high-capacity transmission network is already being realized in other countries like China, India, and across Europe. The U.S. needs to move now to remain competitive.

The federal government has recognized the need for changes to our grid and provided tools like EPAct 05 and FERC Order 1000.

However, it’s clear lawmakers’ intent has not been realized and the implementation of these programs has left much to be desired.

We need additional reforms to make things like FERC Order 1000 and the EPAct 05 work better.

For instance, even though Congress recognized the need for a federal role in the siting of projects in the national interest, in the past decade DOE has not established a single corridor and FERC has never used its backstop siting authority.

In contrast, for gas pipeline siting there is a strong federal role, and over the last decade, the U.S. has added gas pipeline capacity nearly 10 times faster than electricity transmission capacity.

Fortunately, there appears to be bipartisan agreement that America’s infrastructure needs investment and modernization, and priority issues from both sides of the aisle would benefit from this investment.

There’s tremendous enthusiasm on the left to rapidly expand the clean energy economy, but this can only be done cost-effectively if our infrastructure makes it possible for the lowest-cost utility-scale wind and solar resources to meet electricity demand. We need an updated grid and expand transmission to make that happen.

On the right, we see tremendous enthusiasm to leverage private investment, strengthen infrastructure and make the us more competitive in the global economy. Once again, updating the grid and expanding transmission is essential.

Although the Administration missed a huge opportunity by not addressing transmission in its recent infrastructure Executive Order, it has shown a commitment to removing regulatory barriers that inhibit private investment.

In the case of transmission expansion, there is private investment waiting to move – the struggle to get projects built is excessive regulatory red tape —we just need to remove the roadblocks.

So we have willing investors, common interests across parties, shared understanding of the benefits – what’s next?

AWEA is releasing a new report today, Grid Vision: The Electric Highway to a 21st Century Economy – you all have copies of the executive summary on your seats.

This report provides evidence and data to help make this happen.

Our report presents the growing body of research that demonstrates the value of transmission investments for consumers, economic development, grid reliability and resilience, national security, the integration of cleaner energy technologies, and more.

Centered around the “Three Ps” of Planning, Paying and Permitting, the paper also supplies federal and state officials with a policy roadmap needed to realize the benefits of an expanded, improved and interconnected transmission system.

Again – the good news is a boost in transmission infrastructure doesn’t need billions in government dollars – there is plenty of private capital waiting in the wings.

We need the government to remove regulatory barriers blocking that investment and the consumer, economic and public policy benefits that come with it.

Federal and state legislators and regulators all have a role to play in advocating for and implementing these policies to promote cost-effective transmission expansion.

It starts with DOE designating corridors, with FERC providing the critical role of using its backstop siting authority in such areas if transmission siting is becoming an impediment.

And FERC can pursue reforms to ensure Order No. 1000 lives up to its promise of enabling the most cost-effective transmission solutions make it to the finish line in the planning and cost allocation process.

We all seem to agree on the challenge. We have an obvious solution and billions in private investment ready to invest.

We don’t have to wait—let’s make a smart down payment on our future by updating and expanding America’s electric grid.