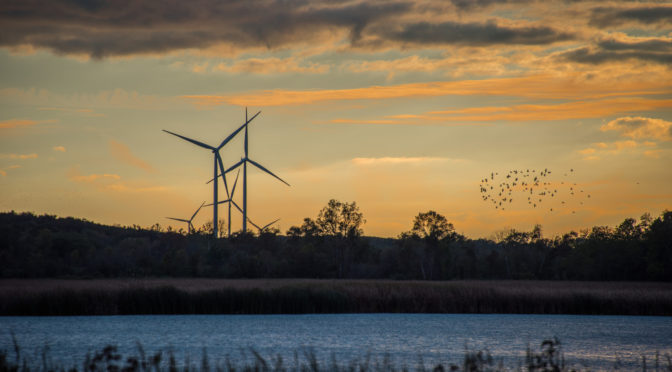 If trustees agree, the village of Maryville may soon get its electricity at a lower cost from a wind farm in the central or northern part of the state.

Short and the village trustees sided with community wind over the other options due to cost and feasibility. Bluestem projects that the village could save $122,278 over 25 years on electric costs, or just under $4,900 annually.

“We looked at the on-site solar option initially but there were inherent problems with picking that option,” he said. “To add it to our water plant would have required an acre of land; we don’t have the room.”

He added that layout and shape of the buildings on that site were counter-productive, too.

The second option, a community solar farm, was not doable due to the state’s economic incentives and because the landowners would not have been amenable to it, based on prior experience, Short said.

“Bluestem approached Maryville, with the goal of seeing if we could help save Maryville cost on their electric bills through the use of renewable energy,” said Jamie Goldenberg, an energy consultant with the company.

Short said Bluestem is partnering with five or six towns in the state. Maryville and El Dorado are two of the areas Short knows about and the two southern-most of the prospective partners; the others are all north of Springfield.

“Maryville fit into our customer description for the state of Illinois. In Illinois with the Future Energy Jobs Act, we believed there is a real opportunity for Maryville to take advantage of low-cost renewable energy,” Goldenberg said.

He added that Bluestem is considering asking Glen Carbon and Troy to join Maryville in this consortium. The more towns Bluestem encourages to join the group, the lower the prospective rates are for everyone in the cooperative.

Bluestem doesn’t deal in large scale wind farms, such as the ones along Interstate 39 in the northern part of the state. The wind farm that would generate the energy for Maryville would use between three and 10 windmills, Short said.

Short said through its Long-Term Renewable Resources Procurement Plan, the Illinois Power Agency plans that 25 percent of the state’s renewable energy must be in place by 2025.

In addition, the Future Energy Jobs Act, or FEJA, passed in 2016, requires 4,300 megawatts of new solar and wind power to be built in Illinois by 2030. Illinois is giving out $30 million in incentives to build clean energy-related job training programs and support future employees between now and 2030.

Based on a 6 MW project, the wind farm is projected to generate 245 kilowatts (kW) of power and its estimated annual production is 1,038,975-kW hours.

“Maryville will receive credits from the farm to offset electricity Maryville would be traditionally buying from their alternate retail electric supplier,” Goldenberg said.

The company claims its approach provides price certainty against Illinois’ retail electric rates, which have a history of extreme volatility year-over-year.

Short believes now that the initial feasibility study has expired, a majority of the trustees are interested enough in the project to approve moving forward with a 180-day memorandum of understanding executed April 18 while Bluestem while it talks to more towns in Illinois about joining the consortium.

“Bluestem’s next steps are to continue growing its potential subscriber base and then move forward through the bid application process, which the Illinois Power Agency lays out in its Long-term Renewable Resource Procurement Plan,” Goldenberg said.

The trustees will vote on the notion at their next board meeting, which is Wednesday. Bluestem’s timeline includes completion of due diligence by Oct. 1, an interconnection approval completed by Oct. 15 and tax credits secured by Dec. 15.
Charles Bolinger
theintelligencer.com