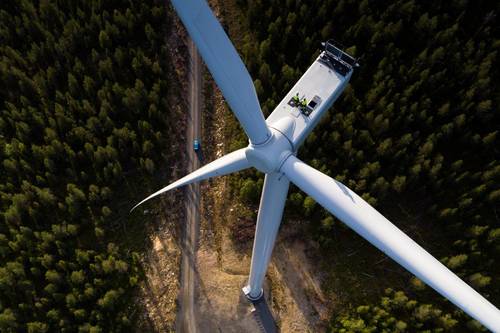 Nordex announced that it generated sales of EUR 398.9 million in the first quarter of 2019 (Q1 2018: EUR 487.9 million). Earnings before interest, taxes, depreciation and amortization (EBITDA) amounted to EUR 3.3 million (Q1 2018: EUR 20.0 million), resulting in an EBITDA margin of 0.8 percent (Q1 2018: 4.1 percent). Business in the first quarter was as forecast by the Nordex Group. Lower construction figures and, as a result, a decrease in sales in the Projects segment are attributable to the installation schedules of customer projects. This development reflects the pattern assumed by the Nordex Group for its business performance in 2019, with weaker sales in the first half of the year and significantly higher sales in the second half.

The Nordex Group confirms its 2019 guidance and expects to generate consolidated sales of EUR 3.2 to EUR 3.5 billion, an EBITDA margin of between 3.0 and 5.0 percent and a working capital ratio of under two percent in relation to sales. The Group plans to make investments of EUR 120 million – a figure which will ultimately depend on the momentum of orders received for new products in the further course of the year.

Operating performance
In the first three months of 2019, the Nordex Group installed a total of 84 wind turbines in nine countries with a combined output of 260.9 MW (Q1 2018: 522.9 MW), with Europe accounting for around 36 percent and Latin America for 64 percent of installations. As a result of lower installation figures, sales in the Projects segment fell by 24 percent to EUR 312.3 million in the reporting period (Q1 2018: EUR 409.6 million). By contrast, sales in the Service segment continued to grow, rising by eleven percent from EUR 78.8 million to EUR 87.4 million.

A significant increase in worldwide installations is planned for the second half of 2019, and production output has already increased significantly. Turbine production, for example, more than doubled year-on-year, from 347 MW to 698 MW. The Company also increased the production of rotor blades by 67 percent to 300 units, up from 180 units. The Nordex Group’s production is always aligned with the delivery obligations associated with the projects. Production output will continue to rise as 2019 progresses.

Key financial figures at a glance
Total assets/total equity and liabilities increased compared with the end of the year, triggered in part by the high level of activity. As a result, the equity ratio is now 19.7 percent (31 December 2018: 22.8 percent). Net debt amounted to EUR 110.3 million (31 December 2018: EUR 32.5 million), and the working capital ratio as a percentage of sales was minus 1.5 percent (Q1 2018: 4.8 percent).

Product portfolio
In March 2019, the Nordex Group launched series production of the Delta4000 series in Rostock as planned. The Company also entered the 5 MW class after unveiling the N149/5.X model, the third product of this new series.

“We started the year according to plan. More specifically, we expect a strong second half of the year with a significantly higher level of activity and consequently higher sales than in the first half. We therefore confirm our guidance. Our new high-efficiency turbine generation is competitive internationally, which is reflected in the demand we are seeing. To date, we have sold Delta4000 wind turbines with a total output of more than one gigawatt,” said José Luis Blanco, Chief Executive Officer (CEO) of Nordex SE. “We are working to steadily reduce the cost of energy and will continue to expand our supply chain in countries with attractive cost structures and increase our production capacity.”

The complete interim report for the first quarter of 2019 is now available on the Nordex Group’s website in the Investor Relations section under “Publications” (ir.nordex-online.com). The Group interim management report and the condensed interim consolidated financial statements were not reviewed by an auditor.