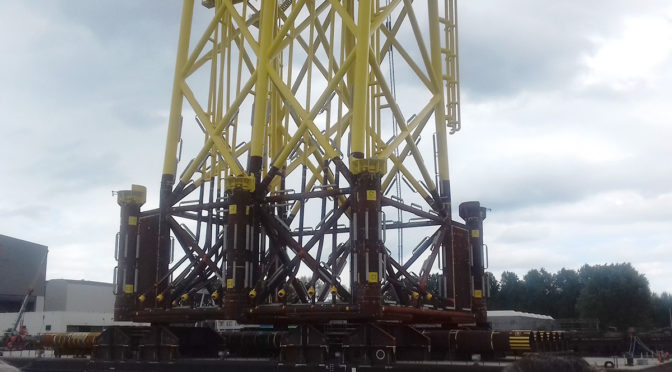 The occasion comes at a time when offshore wind power is set to grow. There are now 189 GW of wind energy in Europe, making up 14% of the EU’s power demand, and 18.5 GW of this is in Europe’s offshore fleet, whose 105 wind farms and 4,500 wind turbines now provide 40,000 jobs.
On 10 May WindEurope CEO Giles Dickson spoke at TenneT’s offshore wind energy event in Schiedam. The TSO’s event marked the setting sail of both the topside for the Borssele Alpha substation and the jackets for the Borssele Beta substations.

Borssele Alpha, scheduled for completion by August, will collect the electricity generated by Ørsted’s Borssele 1 and 2 offshore wind farm and feed it into the Dutch grid. Borssele Beta is scheduled to be completed in 2020, connecting Borssele 3 and 4 ahead of schedule. The two platforms are the first large-scale grid connections to be constructed under the National Energy Agreement for offshore wind farms in the Netherlands. According to the Ministry of Economic Affairs and TenneT, the early launch of the substation was achieved thanks to the successful team work of TenneT with the wind industry, the local authorities, the different technology suppliers and the local communities.

Offshore wind, Dickson said, is a European success story. Turbines are getting bigger and now wind farms can be active system supporters. An example of this is the capability of turbines to remain connected during grid fault and to provide voltage stability support by controlling reactive power (i.e. either injecting or absorbing power, depending on the needs of the grid). Dickson noted that it is important for TSOs to remunerate reactive power control, because its activation leads to active power losses.

These are just some of the capabilities that are leading to ever higher capacity factors in offshore wind, contributing to an overall reduction of LCOE for offshore wind. The current reduction in offshore wind CAPEX, Dickson said, has created a major opportunity to decrease grid-connection costs. This is particularly important, he said, when we consider future transnational projects to connect offshore wind farms to different countries. He gave the example of Kriegers Flak (currently in construction), and Ijmuiden Ver Nordfolk, an offshore hybrid project of interest between the Netherlands and the UK. Aligning regulation will be crucial here.

Dutch ports are set to heavily invest in infrastructure over the coming years to deliver the high volumes of offshore wind outlined in the Netherlands’ current National Energy and Climate Plan. Dickson also stressed the importance of a ‘happy coexistence’ between offshore wind and other users of the sea: “Offshore wind only works if there’s happy coexistence with fishing, shipping, military interests and biodiversity interests.”

Dickson encouraged attendees to vote in the upcoming European elections (23-26 May), stating that the biggest impact we can make against climate change right now is by voting for more renewables in Europe. He directed attendees to WindEurope’s EU elections campaign page for more information.

Europe’s leading offshore wind event, WindEurope Offshore 2019, will take place in Copenhagen on 26-28 November – and exhibition space is selling out fast. The call for abstracts for the conference programme is now open.