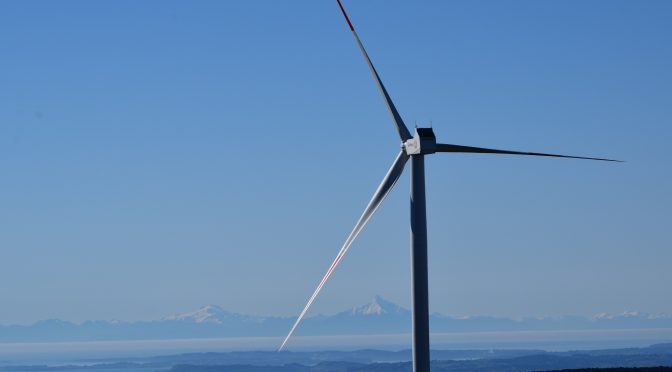 The construction of the new Wind Farm Patagónicos, promoted by ENAP in partnership with Pecket Energy in the Magallanes Region, took a key step this week, after completing the concreting of the bases of its three wind turbines.

It is worth mentioning that this construction stage was very sensitive to weather conditions, and if not done correctly, could have affected the future of the project in a critical manner. During the three days of concreting, the weather was particularly favorable in Magallanes and the tasks were completed successfully.

Now, only the ditches for the medium voltage cables are missing, completing the construction of the control room and the arrival and assembly of the wind turbines.

The Vientos Patagónicos Wind Farm rises about 20 kilometers north of Punta Arenas, next to the ENAP / Methanex industrial site, in the Cabo Negro sector, on the coast of the Strait of Magellan.

It consists of the interconnection of a wind farm consisting of three 3.45 MW wind turbines to the Medium Electrical System of Magallanes, which total 10 MW of installed capacity. The energy generated is equivalent to the consumption of some 6,000 households.

The incorporation of a greater participation of wind energy will provide greater stability to the system and will avoid the use of diesel as a backup in the Region.

The materialization of the project will take the participation of the ERNC to 18% of the electrical energy produced in Magallanes. All this, very in line with the country trend regarding the incorporation of clean energy into the national energy matrix.