The potential of wind energy in Spain is reaffirmed with the data broken down by Autonomous Communities for 2018.

The energy transition is a reality in most of the Autonomous Communities thanks to the installation of wind turbines during the last two decades. Faced with a national goal of reaching a 74% renewable contribution to national power generation in 2030, Castilla y León already exceeded that figure in 2018 with only its wind farm generation, reaching 80% of the coverage of demand thanks to the wind turbines. If you add the rest of renewable, Castilla y León generated last year the equivalent of 144% of their electricity demand with renewables.

The other two Autonomous Communities that exceeded the 50% equivalent coverage of the electricity demand with wind energy were Castilla la Mancha, with 68.6% and La Rioja, with 53%.

In terms of monthly generation, during the month of March last year, which was very windy since nationally 33.1% of wind power generation was reached, both Castilla la Mancha and Castilla y León exceeded 100% of the coverage of demand with wind energy. 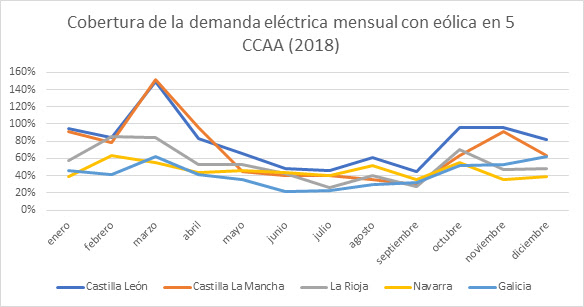 The wind energy in these Autonomous Communities helped to decarbonize the consumption of bordering communities, such as Madrid and the Basque Country, which are large consumers of electricity and have to import electricity from neighboring territories. The following graph shows the monthly evolution in 2018 of wind energy demand coverage in the five Autonomous Communities with the most wind power penetration: 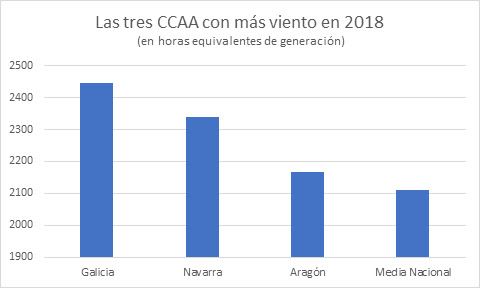 On the other hand, the Communities with the most wind energy in 2018 were Galicia, Navarra and Aragón, all with an advantage of the wind resource per MW installed clearly superior to the national average.

All these figures reaffirm the potential of wind energy in the Spanish energy mix, with a total of 23,484 MW of wind farm installed throughout the national territory. Spain has 1,123 wind farms present in 807 municipalities, with more than 20,000 wind turbines installed, covering 19% of electricity consumption. Likewise, there are 207 manufacturing centers in sixteen of the seventeen autonomous communities.

The Autonomous Community with the greatest installed capacity also continues to be Castilla y León. It is followed by Castilla-La Mancha and Galicia in the ranking of installed power. At the tail are Madrid, Ceuta, Melilla, Baleares and Extremadura. This last autonomous community has just inaugurated its first wind farm with 40 MW of power in February. Therefore, for this year there are already 16 Autonomous Communities that are producing electricity with the wind. Only Madrid and the autonomous cities of Ceuta and Melilla would be left without this clean and renewable generation technology.