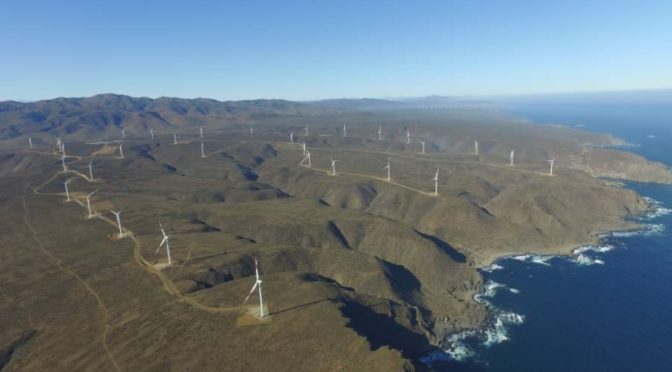 The 32 wind turbines of the Punta Sierra wind power plant are ready to generate clean and renewable energy for Chile. It is the first Pacific Hydro wind farm in the country and the first wind farm financed by China State Power Investment Corporation (SPIC) in the South American country.
Pacific Hydro has boosted its plans for a Latin America-wide expansion of renewable energy projects after bringing online its first Chilean wind farm on Friday.
For the development of the wind power project, Pacific Hydro would have worked closely with neighboring communities. The company also highlights the implementation of a solar miniparque in Caleta Sierra and the support for the electrification process of Mantos de Hornillos.
“We are happy to open our first wind farm, a milestone that not only marks the diversification of our business portfolio, but is the first step to continue developing projects with SPIC. We want to take advantage of all their experience, given that it is the largest generator of solar energy in the world with 13,700 MW and a leader in wind energy with more than 11,600 MW, to grow in Chile and Latin America,” said Pacific Hydro CEO Renzo Valentino.

Punta Sierra has an installed capacity of 82 MW, will generate about 282 GWh/year and has 32 Goldwind turbines of 2.55 MW. The energy generated by the park could supply clean and silent fuel to half of the current Transantiago fleet, that is, 3,000 buses per year. The capacity of your substation, in addition, will facilitate the connection of new projects in the area.
he ceremony was attended by senior executives of SPIC, who valued this first step in Chile and highlighted the historic relationship between both countries.

SPIC vice president Yi Jiang said Pacific Hydro “is an important platform to work in clean energy. SPIC is confident and determined to further increase the investment of clean energy in the future, thus facilitating, together with Chile, a path of clean and green development”.

According to the company’s projections, the Punta Sierra wind farm will supply energy equivalent to 130,000 homes per year.

The wind energy project in Ovalle, in Coquimbo Region of Chile, involved an investment of US$ 140 million.