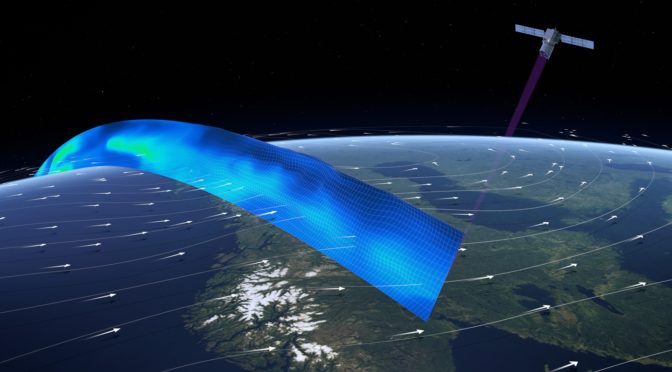 For anyone who watches TV weather reports, the satellite images of cloud formations and winds that play such a crucial role in our weather will be a familiar sight. No direct information about winds has been collected until now, but that is set to change with the advent of Aeolus. This European Space Agency (ESA) mission will generate vertical wind profiles by 2021 using an innovative, high-performance laser system, thus enabling the highly accurate, real-time measurement of global wind fields in the atmosphere for the first time. Scientists and meteorologists can use this data to extract high-resolution information to better understand our weather systems and climate. The 1.4-tonne Earth observation satellite will be launched from the European spaceport in French Guiana on 22 August 2018 at 23:20 CEST (18:20 local time in Kourou) on board a European Vega launcher, and will orbit Earth at an altitude of 320 kilometres.

Aeolus is part of ESA’s ‘Living Planet’ programme, for which Germany is the foremost partner and contributor. The Space Administration of the German Aerospace Center (Deutsches Zentrum für Luft- und Raumfahrt; DLR) in Bonn manages the German contributions to ESA on behalf of the Federal Government: “The years-long, complex development of this laser system – which works in the ultraviolet spectral range – means that Europe has achieved a technological and scientific breakthrough,” says Walther Pelzer, member of the DLR Executive Board. “I am delighted that German expertise from industry and science has not only paved the way for this breakthrough, but has also made a decisive contribution towards a ground-breaking prototype for future operational systems, thus supporting the plans of the World Meteorological Organization (WMO).” 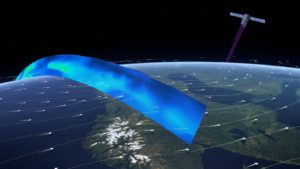 With Aeolus, and the Aladin laser system in particular, medium-term weather forecasts – looking up to 15 days ahead – will see significant improvements: “Above all, an exact understanding of weather dynamics in the tropics and over the Pacific helps us to make more reliable predictions of severe and sudden storms at our latitudes,” says Albrecht von Bargen, DLR coordinator of the German contributions to the analysis and processing of Aeolus data. Previously, weather services have had to base their predictions on comparatively sparse and localised wind data. There is little coverage of the oceans, Africa, South America and the polar regions. Many extreme weather events, such as hurricanes, which can cause extensive damage even in Germany and elsewhere in Europe, occur between the subtropics and the subpolar latitudes. The European Centre for Medium-Range Weather Forecasts (ECMWF) – run by European national meteorological services – will process the Aeolus data and make it available to the European national meteorological services. “As such, Aeolus fills a truly important gap,” von Bargen says.

On board Aeolus, Aladin (Atmospheric laser doppler instrument) is based on lidar (light detection and ranging) technology, meaning the measurement of distances and atmospheric properties using laser light. “Aladin sends short UV light pulses to the Earth’s surface. Using a telescope, the signals scattered by the molecules, clouds and dust particles are then detected again so that the duration of the radiation and its frequency can be evaluated. This allows us to derive global wind profiles, from the ground through to altitudes of 30 kilometres,” explains Oliver Reitebuch from the DLR Institute of Atmospheric Physics in Oberpfaffenhofen. “We have demonstrated the technical and scientific capabilities using a lidar prototype over the course of several campaigns with our Falcon research aircraft.” Even before the start of the satellite mission, DLR scientists were able to obtain measurement data using an instrument similar to Aladin, thus enabling them to demonstrate and test the recording of wind speeds. Following the launch of Aeolus, Reitebuch and his colleagues plan to continue with the aircraft-based measurements and fly beneath the satellite to validate the accuracy of its wind measurements.

German industry and research institutions have provided key technologies for the development of the Aladin laser instrument. OHB System AG in Munich developed the transmission and reception optics for the UV laser beam. Tesat-Spacecom GmbH in Backnang built not only the communications system, but also the reference laser for the mission’s Aladin instrument. The Airbus site in Friedrichshafen was responsible for the electrical system on the satellite platform. A range of German SMEs and research institutions achieved a technological breakthrough by creating laser optics that work in a vacuum. The companies Layertec (Mellingen) and Laseroptik (Garbsen) supplied optics and coatings, while Laser-Laboratorium Göttingen, the Laser Zentrum Hannover and the DLR Institute of Technical Physics in Stuttgart carried out the test measurements. These institutions have made a significant contribution towards installing optics that will work reliably in the instrument and to a high standard for the satellite’s planned three-year operating life, despite the high laser output.