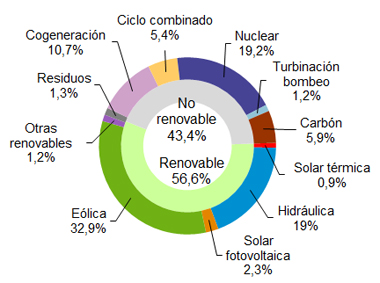 Renewables reached 56.6% of electricity generation in Spain in March, with wind energy accounting for 32.9%, 2.3% for photovoltaics and 0.9% for concentrated solar power.

Generation from January to March 2018 With information to date, the production of wind origin in the first 28 days of the month of March reaches 6,937 GWh, 62.7% higher than the same period last year, and accounts for 32.9% of the Total production.

To date and according to estimated data, generation from renewable energy sources represents 56.6% of production.

77.7% of electricity production this month comes from technologies that do not emit CO2.