ACCIONA Energía has started construction work on the San Gabriel wind farm in the region of La Araucanía (Chile). The company will own and operate the 183-megawatt (MW) facility which will produce emission-free electricity equivalent to the consumption of over 270,000 Chilean homes.

ACCIONA’s production from what will be its second wind farm in Chile will be mainly used to cover the 506 GWh of electric power awarded in a public tender called by the Chilean National Energy Commission (CNE) in August 2016.

“It is with great satisfaction that we announce the start of building work on a new renewables facility in Chile, demonstrating ACCIONA’s commitment to the country through concrete actions and our solvency and reliability when it comes to materializing projects that help to create an ever more sustainable energy system in our country” says ACCIONA Energía Chile General Manager José Ignacio Escobar.

More than 500 jobs created in the construction phase

Located 5 kilometers east of the municipality of Renaico, around 550 km south of Santiago de Chile, the San Gabriel wind farm will be equipped with sixty-one AW132/3000 wind turbines of Nordex Acciona Windpower technology. This model is designed to optimize energy capture on sites with low wind speeds. With rated power of 3 MW, each turbine will be powered by a 132-meter-diameter rotor on a concrete tower with a hub height 120 meters, reinforced with anti-earthquake technology.

San Gabriel will be the first wind farm in Chile to incorporate concrete tower technology, a field in which ACCIONA has extensive international experience. It is suitable for sites where it is important to reach greater tower heights to capture the wind resource and increase energy production.

The towers will be manufactured in a provisional plant built near the site, a model that increases the level of local outsourcing of components, the creation of jobs locally and, basically, a greater impact on the economy of the area where the wind power project is implemented. It also requires less transport, which reduces costs and the associated environmental impacts. 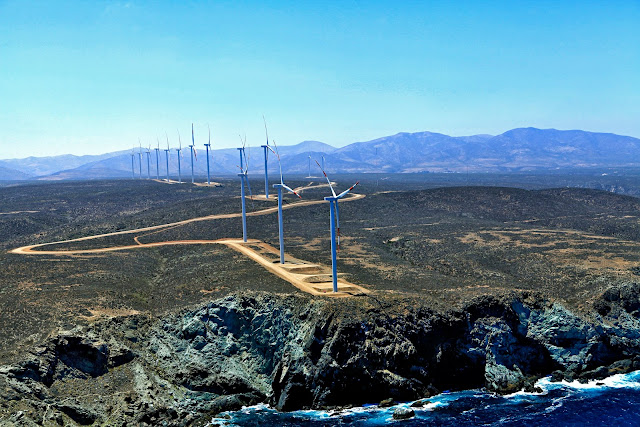 The installation of San Gabriel will mean the creation of around 510 jobs on average during the construction period, and another 15 permanent jobs for the operation and maintenance of the wind farm, plus the knock-on effect on the economic development of the region.

In line with its philosophy of cooperation with communities that live in the areas directly affected by its projects, ACCIONA has maintained frequent contacts with regional stakeholders since the start of the project, informing them about the progress made and laying the groundwork for long-term cooperation. A number of cooperation agreements have been reached in this process of dialogue with different social organizations, the aim being to improve the quality of life of residents in aspects such as productive development, basic sanitation and street lighting, among other community promotion    initiatives.

From the environmental point of view, after the wind farm enters service (planned for September 2019) it will avoid the emission to the atmosphere of around 632,000 tonnes of C02 per annum from coal-fired power plants, with a cleaning effect on the air equivalent to the presence of 31 million trees.

A growing presence in Chile

The start-up of San Gabriel will take ACCIONA’s renewables capacity in Chile to 474 MW, joining the Punta Palmeras (45 MW) wind farm in Coquimbo (grid connected in 2014) and the El Romero Solar photovoltaic plant (246 MWp) in Atacama, in service since November 2016. ACCIONA has other wind and photovoltaic projects in the pipeline at different stages of development.

Prior to the 2016 tender, the company was awarded capacity in the first auction for renewable and conventional energy generators organized by the CNE. In December 2014 it was allocated up to 600 GWh/year for the 2018-2032 period.

Additionally, the company has signed several PPA contracts with corporate clients in Chile. Two that stand out are the one signed with Google to cover the electricity consumption of its data center and other facilities in the country, and another with the distribution chain Falabella to supply around one hundred of its retail stores in Chile.

ACCIONA has been present in other fields of activity in Chile since 1993, initially through its Infrastructure division, with major projects in the construction of highways, hospitals, hydroelectric plants and infrastructures for the mining sector. In the water business, ACCIONA has designed, built and operates a large desalination plant for the mining industry in Copiapó. It has also constructed a number of wastewater treatment plants.

ACCIONA Energía is a global operator in renewable energies with over 20 years’ experience in the sector and almost 9,000 MW under its ownership. It owns and operates 220 wind farms totaling 7,298 MW; 79 hydro plants (888 MW); 6 CSP plants (314 MW); photovoltaic plants totaling 389 MWp and three biomass plants (61 MW). The company develops projects for customers in wind and photovoltaic power, and markets power to large customers.