Siemens Gamesa Renewable Energy (SGRE) has combined the experience of two strong players, building on the merger that took place in early 2017. Thanks to this process, the company is now launching the new geared turbine SG 4.2-145, as part of the new geared turbine platform Siemens Gamesa 4.X. The model SG 4.2-145 offers best-in-class LCoE at medium wind sites in the 4-megawatt segment and marks the start of a next-generation product platform for high performance geared onshore wind turbines. This new turbine for Onshore will increase the annual energy production by 21%. Additionally, SGRE launches the new direct drive offshore wind turbine SG 8.0-167 DD, with a rotor diameter of 167 meters. Its B82 blades will allow for an 18% greater swept area and up to 20% higher annual energy production than its predecessor SWT-7.0-154. As part of the proven offshore direct drive platform, the SG 8.0-167 DD utilizes known technology, combined with its rotor upgrade, to offer customers reliable revenue streams with reduced cost of energy and mitigated risk.

Both product launches are part of SGRE`s new “One Segment/One Technology” philosophy announced in early November. By 2020, the company will have one technology per business segment. In onshore, SGRE will streamline its technology approach and focus on geared solutions. In offshore, SGRE opts for the direct-drive platform only. 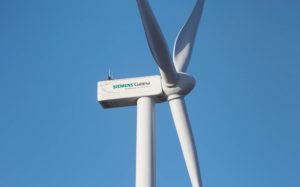 “The single platform strategy helps the company to transition to a more focused offer in the medium-term by utilizing economies of scale throughout the supply chain. This is how we will deliver lasting value to our customers”, says CEO Markus Tacke. Recently launched models based on the proven product platforms of Siemens Gamesa will help to bridge into the next years when the new geared platform goes into serial production.

The onshore model SG 4.2-145 is rated at 4.2 megawatts and features a 145-meter rotor. Its medium wind design will cover a broad range of sites. The technology is based on proven concepts such as a 3-stage gearbox and a Double Fed Induction Generator (DFIG). The new turbine incorporates the experience and expertise of both companies, who together have an installed global onshore wind fleet of nearly 72 gigawatts. Based on the Siemens Gamesa 4.X platform, further models for high and low-wind sites with rotor diameters of 132 and above 150 meters are currently under development.

The new turbine offers maximum flexibility regarding a power range that can be adjusted between 4.0 and 4.4 MW and to different tower configurations that allow for hub heights of 107.5, 127.5 and 157.5 meters. Two converter options help to comply even with enhanced demands in grid performance. The new 71m blades offer a risk-reduced design in terms of airfoil polar curves through wind tunnel test validation. Due to a high absolute thickness at its root sections the new 71m blade achieves reduced mass at minimized cost. Chord alleviations in the mid-sections reduce maximum loads while optimized tips mitigate noise: At full load the turbine’s noise level is 106.9 dB. Compared to the model G132-3.465 MW the new SG 4.2-145 offers an increased swept area of 21% resulting in an enhanced AEP by more than 21 percent. The prototype installation is planned for autumn 2018, while certification is expected for 2019. Start of production will be in early 2019.

“With our new geared onshore Siemens Gamesa 4.X platform we offer even more technology options to our customers, helping to make their projects a profitable and sustainable asset,” says Ricardo Chocarro, CEO Onshore at SGRE. “With the combined expertise in our merged company we offer a best-in-class solution in the market for turbines over 4 MW for a wide range of medium wind sites. For low wind sites we will soon launch a rotor option with a diameter above 150 meters. For high wind sites the turbine will be available with the proven 132 meter rotor.”

The latest turbine on the Offshore DD platform, the SG 8.0-167 DD offers a rotor diameter of 167 meters. It will utilize proven technology and allow a short time to market by re-using all other components from its predecessor, the SWT-7.0-154. In January 2017, the first prototype in the 8MW class was installed and commissioned according to plan in Østerild, Denmark. While a testing program with focus on the electrical system is performed on this prototype, an additional SG 8.0-167 DD prototype will be installed in Østerild in 2018. With a larger rotor, it will be used mainly for blade tests. The SG 8.0-167 DD is expected to be market-ready in 2020. To accelerate time-to-market, Siemens Gamesa is collaborating with Fraunhofer IWES in Bremerhaven, Germany. In addition to in-house testing and prototype operation, the nacelle of the 8 MW turbine will perform laboratory tests in the institute’s cutting edge Dynamic Nacelle Testing Laboratory (DyNaLab). The comprehensive program including load simulations and grid compliance tests will start in spring and will be completed by the end of 2018.

“The introduction of the SG 8.0-167 DD shows our continued dedication to industrializing the offshore market,” says Andreas Nauen, CEO Offshore at SGRE. “With the rotor upgrade we offer our customers even higher energy yields at lower wind speeds. The flexibility of the offshore direct drive platform helps to reduce the Levelized Cost of Energy (LcoE) and at the same time mitigate risks,” he adds.

Similar to the upgrade from seven to eight megawatts, the technology on the offshore direct drive platform allows for re-using most components. Only the rotor will be upgraded. Through technology improvements in the blades’ structural components, SGRE engineers have managed to design the 81.5-meter long B82 blade with less than a 20 percent increase in mass compared to the B75. Both blade types are manufactured as fiberglass components, cast in one piece using SGRE`s patented integral blade process.

With a total capacity of approximately 11 gigawatts installed offshore and pioneering projects dating back to 1991, Siemens Gamesa Renewable Energy has the longest track record of all wind turbine suppliers in the offshore industry. By end of September 2017 more than 300 units of the offshore direct drive platform have been handed over to customers. SGRE has a vast experience with the direct-drive technology having installed more than 2,230 units in almost 10 years.
With the launch of the new SG 4.2-145 and the SG 8.0-167 DD, SGRE has adopted a product denomination fitting the company name. The first two letters stand for the company name. They are followed by the turbine’s rating, then the rotor diameter. All new SG direct drive units have a DD at the end of the product name.

To drive down operational costs of wind projects, Siemens Gamesa Wind Service announces to expand its O&M scope to 3rd party technology. This approach does not only include maintenance of the wind turbines but also life extension and retrofit solutions for enhanced AEP. As an alternative to repowering, SGRE’s Service Business Unit offers an extension of turbine lifetime beyond 20 years to aging fleets in Northern Europe, Spain, China, India and other markets.