The Renewable Energy Resource Areas (YEKA) model, initiated by the Ministry of Energy and Natural Resources in wind power following solar energy, will bring an investment of approximately $1.2 billion to Turkey. With the 1000-megawatt (MW) power plant planned to be commissioned in 2023, the electricity need of 1.2 million households will be covered from wind power. Mustafa Serdar Ataseven, chairman of the Turkish Wind Energy Association (TÜREB), said companies from the U.S., China, Germany, Denmark and many other European countries are already interested in the tender and that bids will be submitted from July 22 to July 27, stressing that the first YEKA project will provide employment to thousands of people. 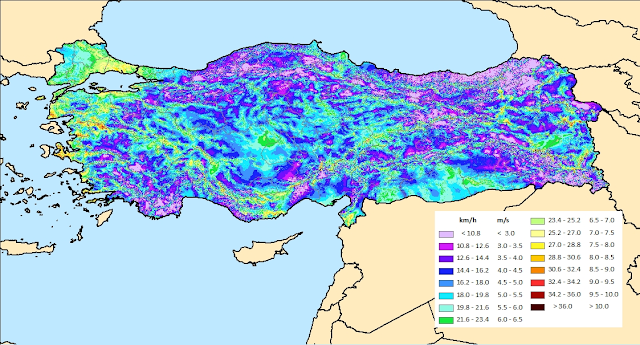 The process has been accelerated for the wind by YEKA, which was launched by Energy and Natural Resources Minister Berat Albayrak in order to end Turkey’s external dependency in energy and ultimately place it in the category of exporting countries. Noting that they expect the tender to be held at the end of August, TÜREB Chairman Ataseven said the first wind YEKA will provide electricity to approximately 1.2 million households. Ataseven stated that approximately 350 to 400 turbines will be placed in the areas to be selected by the company to win the tender, adding that they expect an investment of $1.2 billion in Turkey with the project.

Seven regions determined for power plantsExplaining that the winner of the tender will operate in seven regions to generate wind power with a total capacity between 1,000-1,700 MW, Ataseven said 700 MWs of the said capacity can be established in the Edirne-K?rklareli-Tekirda? region, followed by 200 MWs in the Ankara-Çank?r?-

K?r?kkale region, 200 MWs in Kayseri-Ni?de, 200 MWs in Sivas, 150 MWs in Malatya, 150 MWs in the Bilecik-Kütahya-Eski?ehir region and 100 MWs in the Burdur-Denizli-U?ak region. Noting that a 1,700-MW capacity was foreseen by investors, Ataseven said, “The allocation of 700 MW to the Edirne region was considered in terms of supply security. Energy is generated in Turkey’s east and transferred to the west. Feeding Thrace requires a transition from both Çanakkale and the Bosporus. Rather, we thought ‘Let’s produce in Thrace and consume there.'”