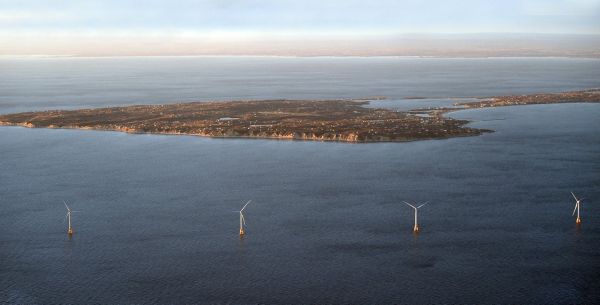 Block Island on Monday will formally throw the switch on a first-time connection to the New England energy grid through a new cable to the mainland, and begin receiving power from the country’s first five offshore wind turbines.

“We’re so looking forward to the peace and the quiet,” said Wright, alluding to the shutdown of the combustion generators. A switch connecting to the grid via a National Grid cable to the mainland is scheduled to be thrown at 5:30 a.m. “We’re confident in the switch-over.”

All eyes have been on Block Island’s wind farm, visible 14 miles from Montauk Point, since Deepwater Wind completed the first offshore U.S. wind farm three miles from the Block Island coast in December. The Long Island Power Authority this year signed a contract with Deepwater to construct an array three times larger in the waters off Rhode Island. LIPA is also eyeing an even larger plan by Deepwater in the same Rhode Island-Massachusetts wind energy area for an additional 210 megawatts of wind power.

With annual power costs projected to decline $500,000 to $700,000 for the utility, Block Island residents will see a level of savings on their bills — for the first year, at least. A supply charge will drop to 12.44 cents from a current 17 cents, Wright said. After a year, new capacity charges will bring the cost of power to around where it was in the early part of this year for power from the local plants. The supply charge has been 30 cents or more when fuel costs have skyrocketed. “We are able to build some stability into customers’ electric bill,” Wright said.

Two elements of the project that saw cost overruns were the only setbacks to the project, Wright said. A substation on the island cost $1.8 million, he said, more than three times the original estimate of $550,000. The cable itself cost $125.5 million, compared with the originally estimated $75 million.

“We’re still delivering some savings, it’s just not as much as we’d hoped for,” Wright said. There are two other charges on bills: a $12.38 customer charge, and a plant and distribution charge for operational costs, which varies between just under 9 cents and 24 cents per kilowatt hour, in winter and summer, respectively.

The old diesel plants will be kept for backup power, Wright said. That’s expected to improve the air quality immediately on this small island, with 2,000 year-round electric customers.

Some customers are already eyeing air conditioners for their homes and businesses, including hotels. The appliances had been largely avoided because power on the island has been so constrained, and expensive.

“We will do our best to keep our load down,” Wright said of electric demand. “We’re definitely concerned about load growth. I anticipate with lower prices people will want to use a little more” electricity.

The new cable also includes several fiber optic lines that the Island can use for high-speed communications. National Grid incorporated the fiber optic line to monitor the underwater cable.