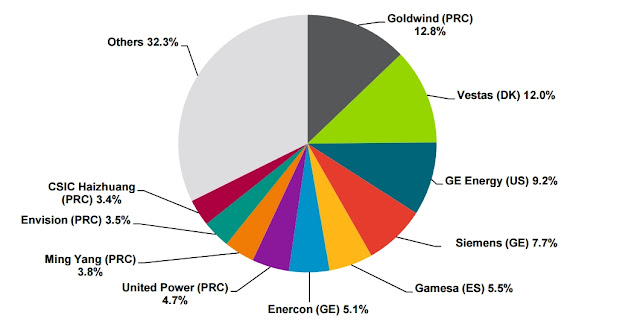 Vestas had a record year, with orders worth nearly 9 GW helping the company to impressive yearly figures. However, Goldwind, based out of China, and supplying primarily to China, benefited significantly from China’s massive wind turbine figures in 2015. 98% of Goldwind’s installations were located in the Chinese market, which installed 30.2 GW in 2015.

The two companies have been fighting it out for top spot in recent analyst reports. In February, Bloomberg New Energy Finance reported that Goldwind had unseated Vestas in 2015 for onshore wind turbine manufacturers. Towards the end of March, MAKE Consulting revealed that Vestas and Goldwind had reclaimed the top two positions, respectively, as the world’s leading wind turbine original equipment manufacturers.

GE Energy held onto its third spot “backed by strength in its domestic market in the United States and Brazil, as well as increasing installations in Europe.”

Overall, according to Navigant’s report, 2015 represented a banner year for the global wind industry, showing “just how much the wind power industry has grown over the past few years” and illustrating “how firmly wind energy is entrenched as part of the broader worldwide energy system.” In 2015, Navigant found 63 GW of wind capacity was added, a 23.2% increase over 2014, with cumulative global wind power capacity growing to 434 GW.