With a total installed capacity of 400 MW, Cimarron Bend will be Enel’s largest wind farm worldwide. Enel will invest approximately 610 million US dollars in the construction of the new facility. The power and the renewable energy credits from Cimarron Bend will be sold under power purchase agreements to Google and to the Kansas City Board of Public Utilities (BPU). 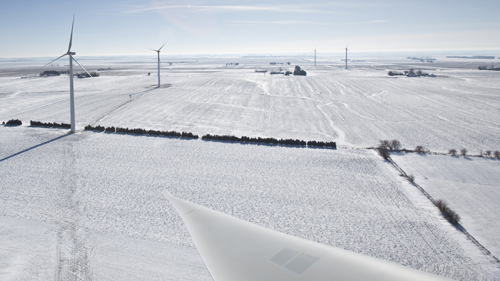 Enel S.p.A. (“Enel”), through its subsidiary Enel Green Power North America, Inc. (“EGPNA”), has started construction of the Cimarron Bend wind farm in the United States. Once completed, Cimarron Bend will have a total installed capacity of 400 MW and will be Enel’s largest wind farm worldwide.

The facility is owned by Cimarron Bend Wind Project, LLC, a subsidiary of EGPNA, and is located in Clark County, Kansas. Once fully operational, Cimarron Bend will be able to generate around 1.8 TWh annually, providing enough energy to meet the annual consumption needs of more than 149,000 U.S. households, while avoiding the emission of around 1.3 million tonnes of CO2 each year.

“This project marks a major milestone for Enel, as not only will Cimarron Bend be the largest asset in our portfolio, but it also opens our renewable energy to new partners and uses,” said Francesco Venturini, Head of Enel’s Global Renewable Energies Division, Enel Green Power. “As we continue to invest and grow in the U.S. we aim to cooperate with companies and partners that share the same vision for a more sustainable future.”

The power and renewable energy credits from Cimarron Bend, which is expected to enter into service by 2017, will be sold under two 200 MW bundled, long-term power purchase agreements, one with Google and the other with the Kansas City Board of Public Utilities (BPU). Cimarron Bend is the first of Enel’s North American wind farms to sell a portion of the power produced to a corporate off-taker.

The construction of Cimarron Bend will require an investment of approximately 610 million US dollars and is part of the investment outlined in the Enel’s current strategic plan. The project is financed through the Enel Group’s own resources.

Enel’s North American renewable subsidiary EGPNA already owns and operates four wind farms in Kansas and is the largest operator in the state’s wind sector with a total operating capacity of close to 1 GW. EGPNA is present in 21 US states and two Canadian provinces with a total installed capacity of more than 2.5 GW, of which more than 2 GW comes from wind, 316 MW from hydro, 72 MW from geothermal and 29 MW from solar.