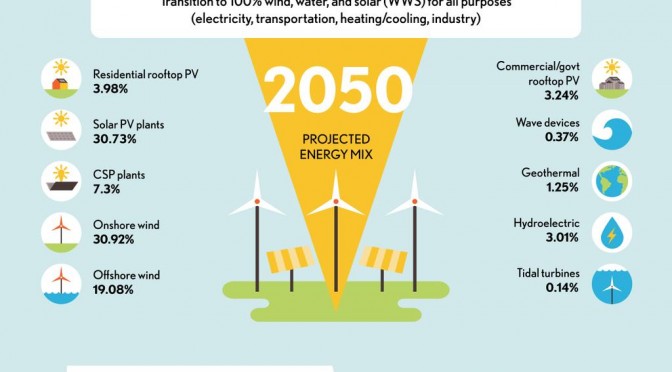 United States could feasibly convert to 100% renewable energy by 2050 using existing technologies, according to a group of researchers from Stanford University. Civil and environmental engineering professor Mark Z. Jacobson and his colleagues have compiled individual roadmaps for each of the 50 states in the US, setting out how to achieve this feat. They say that the plans are both technically and economically possible using existing technologies. The plans include an interim step of an 80% transition by 2030. The researchers have published an interactive map at http://thesolutionsproject.org, which gives a visual explanation of the solutions for each state. 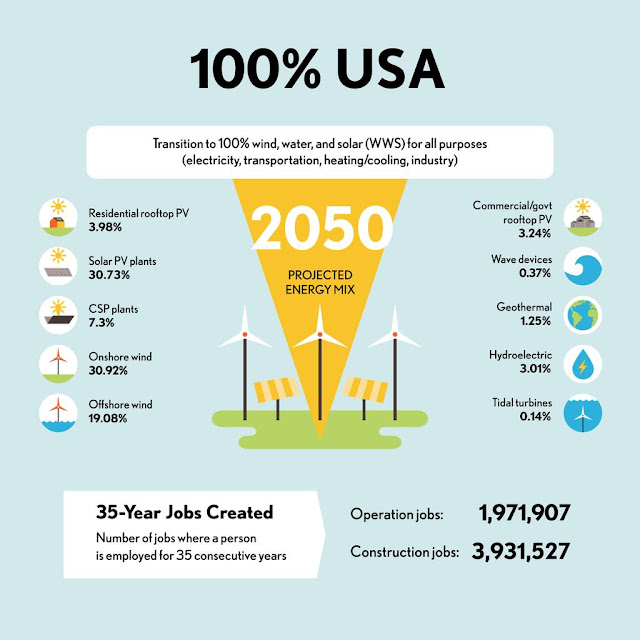 The researchers began by looking at the energy use in each state, in the residential, commercial, industrial and transport sectors, and predicted how the demands might change between now and 2050. In each sector, they looked at the source of the fuel, whether coal, oil, gas, nuclear or renewable. They then calculated how much extra electricity would be required if all those uses were converted to electricity. Jacobson says this would be challenging and assumes that by 2050 all cars would be electric, for example, and all homes and industry would have electric heating and cooling systems.

The team found that in a fully electric system, the actual energy demands would in fact fall by 39% by 2050, although part of this would come from increased efficiency.

In the state roadmaps developed, no more than 0.5% of any state’s land would need to be covered in wind turbines or solar panels. Each state’s energy mix was calculated using its renewable energy resources, whether wind, solar, geothermal, hydroelectric, tidal or wave power. The analysis included looking at sun exposure, how many rooftops could have solar power panels fixed to them and the offshore wind potential. No new hydroelectric dams will be needed but the efficiency of existing ones will need to be improved. Geothermal energy is likely to be available at a reasonable cost in 13 states.

To take one state as an example, Mississippi could be 74% powered by solar PV plants in 2050. 2.4% of its power would come from residential solar panels and 1.6% from solar panels on commercial and government buildings. Concentrated solar power plants would account for 5% of the state’s electricity generation. Onshore wind could generate 5% of Mississippi’s power, with 10% from offshore wind. Wave and tidal devices would generate a total of 2%. There is no geothermal power available in the state.

Jacobson and the team also looked at other benefits to the plans. In Mississippi, 100,778 construction jobs and 40,659 operational jobs would be created. These are long-term jobs expected to keep someone in employment for 40 years or more, rather than short-term jobs. 553 air pollution deaths would be avoided and US$4.2bn in health costs would be saved annually. The electricity costs would fall from 10.8 c/kWh to 9.5 c/kWh, saving the average householder US$531 per year. The researchers estimate that the plan in Mississippi would pay for itself in just four years based on the air pollution and climate cost savings alone.

The upfront costs relating to the changes in habits and infrastructure in each state would be high, but as sunshine and wind are free, unlike fossil fuels, the researchers believe that the overall cost would be the same as that of fossil fuel infrastructure, maintenance and production. Jacobson says that when you take into account the costs of climate change and healthcare, as well as the rising price of fossil fuels, wind, water and solar energy are half the cost of conventional generation. If the plans are implemented, it would result in 63,000 fewer deaths normally caused by air pollution, as well as largely eliminating greenhouse gas emissions.

California was the subject of one of the first roadmaps to be published, and the state has already adopted some of the suggestions. Around 60% of its electricity should come from renewable resources by 2030.

Several other states are in a strong position already. Washington State already generates 70% of its electricity from hydroelectric sources. If the state was fully electrified, hydroelectricity would provide around 35% of its power needs, and the researchers say that wind and solar could easily supply the rest. Iowa and South Dakota generate around 30% of their power needs from wind.

“The main barriers are social, political and getting industries to change. One way to overcome the barriers is to inform people about what is possible. By showing that it’s technologically and economically possible, this study could reduce the barriers to a large-scale transformation,” says Jacobson, adding: “There is very little downside to a conversion, at least based on this science.”