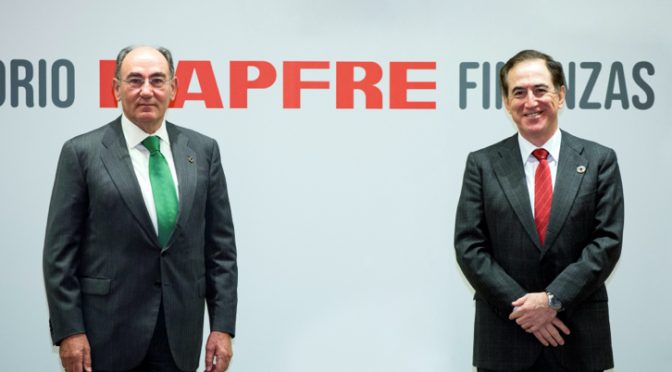 They form ‘Energías Renovables Ibermap S.L.’ as a 325-MW co-investment vehicle -195 MW of operational wind power and 130 MW of photovoltaic energy under development- with the aim being to keep incorporating green projects until reaching the 1,000 MW mark.

Iberdrola and MAPFRE are forging ahead with their strategic alliance in the energy field, which sees them join forces to invest in renewable energies in Spain. Both companies have come together to form Energías Renovables Ibermap S.L., a pioneering co-investment vehicle which, after having incorporated 95 new megawatts (MW), now has 325 MW: 195 MW of operational wind power and 130 MW of photovoltaic energy under development. The alliance between both companies, leaders in their respective sectors, is aiming to incorporate more assets until the joint investment reaches 1,000 MW.

The holdings in this newly formed co-investment vehicle are divided as follows: MAPFRE is the major stakeholder with 80 %, while Iberdrola not only holds the remaining 20 %, but is also responsible for the promotion, construction and maintenance of the renewable energy projects.

The recently incorporated 95 MW correspond to operational wind farms, all of which are located in Andalusia, and join the 230 MW announced in April. Of these, 100 MW of wind power are also operational and are generated in Castilla y León. The remaining 130 MW are photovoltaic and currently in the development phase in Castilla-La Mancha, and their start-up is planned for the third quarter of 2022.

The joint project being implemented by these leaders of their respective sectors recently came into being with the launch, by Mapfre, of the Mapfre Energías Renovables I F.C.R. renewable energies fund, which the insurance group will use to channel its investment. Furthermore, as has been the case with other similar investments made by MAPFRE in other property assets, infrastructures, risk capital or traditional investment options, this fund is open to other institutional investors.

The alliance between Iberdrola and MAPFRE enables two leading companies to combine their respective strengths and capabilities. Both are committed to the energy transition and the green economy, which they see as the way towards industrial recovery, increased employment and the transformation of the country’s industrial fabric. Iberdrola is joined by a partner in the development of its countrywide renewable energies growth plan and its asset rotation strategy, while MAPFRE is strengthening its commitment to investing in sustaiables in Spain with the assurance of doing so with a world leader in renewable energies. At the end of last year it carried out the initial closure of its first infrastructures fund involving an amount of over 300 million euros. This was an initiative launched together with ABANTE to invest in the funds of Macquarie Infrastructure and Real Assets (MIRA), the world’s largest infrastructures group.

MAPFRE’S policy of Socially Responsible Investment is one of the hallmarks of its management company, MAPFRE AM, which is the largest independent management company in Spain with over 40 billion euros in assets under management. Furthermore, it is the only Spanish organisation to have obtained the prestigious ISR Label certification bestowed by the French Finance Ministry.

Over the last few months Iberdrola and MAPFRE have also made progress with regard to the agreement by which the insurer’s sales network in Spain, which consists of around 3,000 branches, offers the energy company’s products in a customised and 100 % renewable package.

MAPFRE can count on the services of Kobus Partners for managing the fund, while Blue Tree Asset Management and King & Wood Mallesons have been acting as technical and legal advisers respectively.

Iberdrola has been leading the energy transition for two decades and acting as a key driving force in the transformation of the industrial fabric and the green recovery of the economy and employment. The company has launched a historic investment plan worth 150 bn euros over the next decade – 75 billion euros by 2025 – to triple renewable capacity and double network assets and take advantage of the opportunities offered by the energy revolution facing the world’s leading economies.

In Spain, investments to 2025 amount to 14.3 billion euros, mainly for the deployment of an ambitious plan for renewables and smart grids. In Spain, it is the leader in the renewable energies sector with an installed capacity of 17,500 MW, which will increase to 25,000 MW with its investment plan up to 2025.

After investments of 120 billion euros over the last twenty years, Iberdrola is a leader in renewable energy with 35,000 MW installed worldwide; a volume that makes its generation park one of the cleanest in the energy sector. With emissions of 28 grCO2/kWh, which are already two thirds lower than the European average, its investment strategy in clean energy and grids will make Iberdrola a “carbon neutral” company in Europe by 2030.