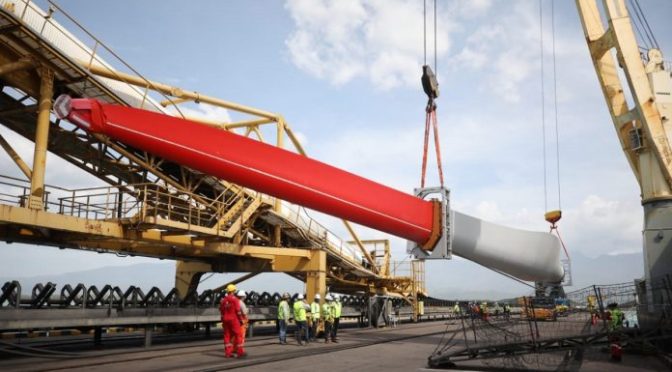 The Ministry of Mines and Energy of Colombia highlighted that, after the approval in Congress of the Energy Transition Law, the first wind turbines began to arrive in La Guajira for the assembly and commissioning of the first large-scale wind farm that will be installed in the country in more than 17 years.
“This milestone consolidates the Energy Transition, through the massification of non-conventional renewable energies, led by the National Government and that will allow a historic leap in this matter, expanding capacity from less than 0.5% to about 12% installed in Colombia in this type of source ”, highlighted the Ministry.

In this regard, the Minister of Mines and Energy, Diego Mesa, assured that “we continue to consolidate the Energy Transition that is a legacy for the present and future of Colombia and that places us as one of the leading countries in this matter in the region. The arrival of these first turbines in La Guajira is one more step that will allow us, together with the Energy Transition Law and a new renewable auction, to continue expanding Colombia’s installed capacity in this type of energy, making its electricity matrix more resilient. and friendly with the environment ”.

It is worth mentioning that these turbines will allow the start-up of the Guajira I project of Isagén, which will have a generation capacity of 20 megawatts (MW), equivalent to the electricity consumption of more than 33,000 Colombian families, and which is expected to come into operation before the end of 2021.

Recommended: The bill that seeks the energy transition in Colombia has been approved

Meanwhile, the Mines and Energy portfolio highlighted that last year was consolidated as a key to Colombia’s Energy Transition, since with the delivery of solar farms in Bolívar, Cauca, Córdoba, Meta, Risaralda, Tolima and Valle, it was the year with the largest incorporation of solar energy in the history of the country.