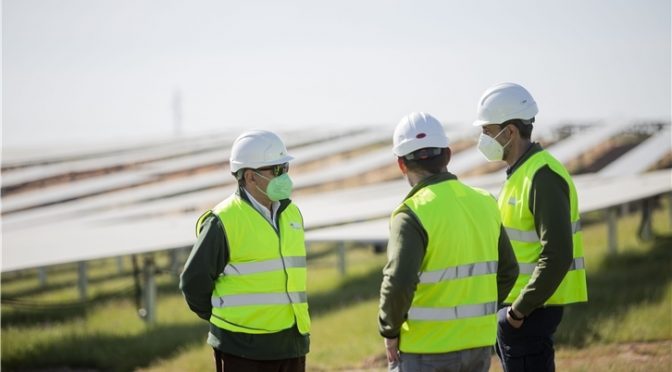 International Sun Day celebrates the opportunities presented by renewable solar energy for the energy transition, in coexistence with conserving biodiversity and protecting the environment.

To mark International Sun Day, which is observed to raise awareness of solar energy as a renewable energy source to drive the energy transition, in coexistence with biodiversity and the environment, Iberdrola has commissioned the 328-MW Clecalavín photovoltaic plant in Extremadura. The project is being commissioned following an investment of 250 million euros, which has given a significant boost to local employment. At peak times during the construction stage, more than 1,140 workers were employed on the project, 60 % of them from nearby towns and other places in Extremadura.

The plant will supply energy to a population equivalent to 175,385 homes/year and prevent the release of 100,000 t CO2/year.

Its green energy will supply clean electricity to the 9,000 points of supply in the Orange network, based on a long-term Power Purchase Agreement or PPA entered into with this telecommunications firm last year.

The commissioning of Clevlavín follows the start-up of projects including Núñez de Balboa, Campo de Arañuelo I and II in Extremadura, Azaila (Aragon, 50 MW), and Andévalo (Andalusia), all of which have been commissioned in recent months, bringing the company’s total operating capacity in Spain to more than 1,000 MW.

It is currently building a further 1,200 MW of photovoltaic capacity and has guaranteed 4,900 MW by 2025 in Spain and 9,900 MW globally. The photovoltaic plants under construction in Extremadura include the Francisco Pizarro, Arenales and other projects in Cedillo – a key region for its photovoltaic renewables strategy in the country.

In Spain, Iberdrola is the leader in the renewable sector with an installed capacity of 17,571 MW, which will increase to 25,000 MW with its investment plan for 2025.

Iberdrola has been leading the energy transition for two decades, acting as a key driving force to transform the industrial fabric and in the green recovery of the economy and employment.

To achieve this, the company has launched a historic investment plan worth €150bn over the next decade (€75bn by 2025), to triple its renewable capacity to almost 100,000 MW, doubling its network assets and taking advantage of the opportunities offered by the energy revolution the world’s leading economies are facing. In Spain, investments until 2025 account for some €14.3bn, €7bn of which will be used to develop renewable projects.

Investments worth €120bn over the last twenty years have made Iberdrola a leader in renewable energy with nearly 35,000 MW installed worldwide, a volume that makes its generation fleet one of the cleanest in the energy sector.

With emissions of 28 gCO2/kWh, which is already two thirds lower than the European average, the investment strategy in clean energy and grids will make Iberdrola a carbon-neutral company in Europe by 2030.