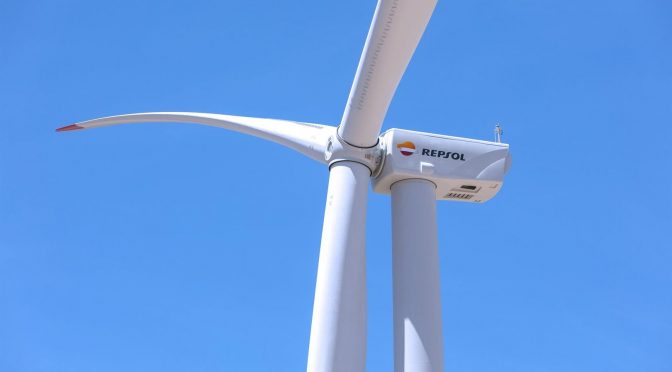 These two wind power parks will have 4 and 12 wind turbines, respectively. Likewise, Repsol plans to begin work on three more parks this year.
Repsol has started work on ‘Delta II’, its largest wind energy project which, once completed, will have a total capacity of 860 megawatts (MW) distributed in 26 wind farms located in the three provinces of Aragon (Zaragoza, Huesca and Teruel).
In this first stage of construction, the company chaired by Antonio Brufau has begun the works of the first two wind farms, called ‘La Cometa I’ and ‘La Cometa II’, both located in the province of Zaragoza, totaling 60 MW and whose Start-up is scheduled for the first quarter of 2022.

These two parks will have 4 and 12 wind turbines, respectively. Likewise, Repsol plans to begin work on three more wind farms this year.

Thank you for watching

‘Delta II’ is scheduled to be completed in 2023 and, at that time, will supply electricity to nearly 800,000 households. Its renewable generation will prevent the emission of more than 2.6 million tons of CO2 each year.

The energy company stressed that the development and start-up of this wind project will provide an important boost to the socio-economic dynamism of the region.

In addition to ‘Delta II’, Repsol has its ‘Delta’ wind project in Spain, also in Aragon, which has been fully operational since last March and has 89 wind turbines with 335 MW of installed power distributed in eight wind farms.
It will also start ‘PI’ this year

It also has another wind project called ‘PI’, located between Palencia and Valladolid, which will have a total installed capacity of 175 MW and whose construction works are expected to start this year.

Likewise, the group led by Josu Jon Imaz is developing three other photovoltaic projects in the country: ‘Valdesolar’, whose construction began in July last year in the municipality of Valdecaballeros (Badajoz) and which will have a total installed power of 264 MW ; ‘Kappa’, with three independent photovoltaic plants located in the municipality of Manzanares (Ciudad Real) that add 126 MW of installed power; and ‘Sigma’, with 204 MW, which is developed in the province of Cádiz.

As an operator, Repsol also made its international leap in the renewable business last year with the signing of a ‘joint venture’ with Grupo Ibereólica Renovables, which gives it access to a joint portfolio of assets in Chile in operation, construction or advanced development of more than 1,600 MW until 2025 and with the possibility of exceeding 2,600 MW in 2030.

This alliance made progress last January in the construction of its first joint wind farm in the South American country, ‘Cabo Leones III’, with 189 MW of power, with the shipment from the port of Bilbao of the main technological components of its wind turbines and with the entry into commercial operation of the first phase of this project.

In addition, they also closed an agreement to sell the energy produced (PPA) for another project in the country, the 180 MW Atacama wind farm.

According to the group’s strategic plan, Repsol plans to reach 7,500 MW of low-emission generation in 2025 and double that figure in 2030. Currently, the company has almost 3,300 MW of total installed capacity for low-emission generation. By the end of the year, it expects to have an additional 710 MW of capacity in operation or in an advanced state of construction.