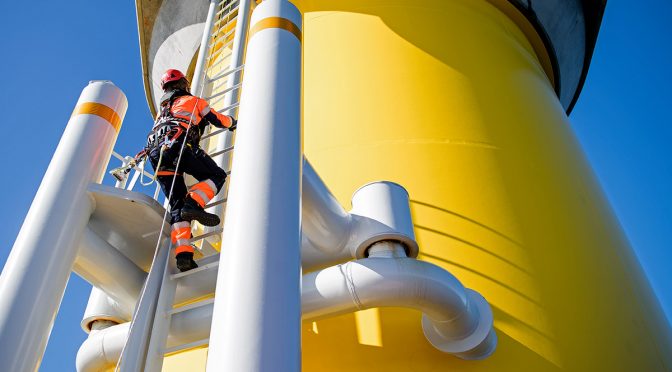 Red Eléctrica de España (REE) is one of the seven TSOs that have signed this initiative.
Eurobar pursues the homologation, both at the regulatory level and in the development of projects, of interfaces and technologies that make it possible to connect offshore power generation parks.
This project is further proof of the shared commitment of European carriers and operators to the reliable and sustainable development of offshore wind turbines.
Seven European carriers and electrical system operators (TSO), including Red Eléctrica de España (REE), have signed a Memorandum of Understanding (ME) to launch Eurobar, an initiative that seeks to interconnect offshore wind generation platforms (offshore) in Europe. The objective of Eurobar is the efficient and safe integration of this technology in the European network, starting from the current regulations and types of projects (generally, point-to-point connections), and evolving towards the development of an interconnected marine network. In this way, it is a matter of configuring and designing a modular network that each of the international partners can implement autonomously. In this sense, the international homologation of interfaces and technologies to be used in said network is key.

Offshore wind farm generation plays a key role for the European Union in the fight against climate change. In fact, the European Commission foresees the installation of up to 300 GW of capacity of this technology by 2050 in order to achieve the objectives defined in the Paris Agreement. In this sense, this initiative between European TSOs is further proof of their shared commitment to the sustainable and reliable integration of offshore wind energy.

In this way, Eurobar pursues the development and implementation of a joint strategy for the future connection of new offshore wind generation facilities with the European transmission grid and between different clusters. Thus, this new initiative aims to support Europe and its TSOs for the efficient and safe connection of offshore wind farms, with an effort to standardize interfaces and technologies, as well as to introduce improvements to reduce the impact, both of the connection in the onshore network, as in the marine network.

In addition, the project aims to standardize the interfaces of the next generation of offshore connection technologies, and thus ensure that all the electrical elements involved are ready to be integrated into these marine networks. The seven TSOs agree that these advances can be gradually implemented when they are economically viable and technically necessary.