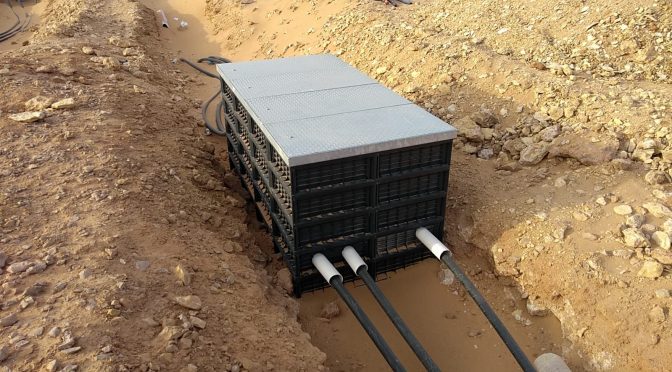 HIDROSTANK has recently supplied its innovative modular pullboxes at the Dumat Al Jandal wind farm, the first wind farm in Saudi Arabia and the largest in the Middle East when completed.

The project has marked a key construction milestone with the arrival of 20 wind turbines at the port of Duba. The 400 megawatt MW wind power project is being developed by a consortium of EDF Renewables and Masdar.

Construction began last August and commercial operations will start in the first quarter of 2022.

HIDROSTANK have worked closely with the technicians of the awarded EPC to define the best solution for the electrical, telecommunication & CCTV ducting access chambers.

For several years, HIDROSTANK has been collaborating in the execution of photovoltaic, thermosolar and wind power plants, where the advantages of its cable pits (easy transport, handling and installation, combined with their high resistance) make it possible to meet, and in some cases shorten, the demanding execution deadlines.

This project in Saudi Arabia joins the numerous projects already carried out in MIDDLE EAST as well as in EUROPE, LATAM, AFRICA and ASIA.