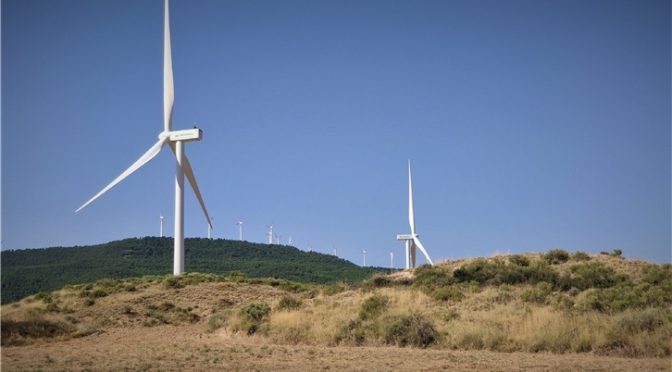 Aragon becomes the second largest producer of wind power in Spain. The wind turbines add a power of 4,025 megawatts and the solar plants 1,115.

Aragon is energetically greener than ever. 2020 has been a year full of milestones and record figures in the deployment of renewable energies, whose production covers for the first time and more than enough all the regional electricity consumption, something that few territories in all of Europe can boast. It is one of the few sectors that has escaped the economic blows of the pandemic. It maintains a dazzling strength, with innumerable investments, constant asset sales and new operators landing in the three provinces, especially in Zaragoza and Teruel. Proof of this are the almost 1,000 megawatts (MW) of wind and photovoltaic parks put into service last year, according to provisional data provided by Red Eléctrica de España (REE).

With this green power, almost the entire gap left by the closure of the Andorran coal power plant has been filled, which on June 30 disconnected its 1,056 megawatts from the system. All of this consolidates the community’s leading role in the electricity decarbonization process that takes place at the Spanish and European level.

Most of this new renewable capacity corresponds to wind energy, in which Aragón has become the second national producer when only a year ago it ranked fifth. It exceeds 4,000 megawatts of this technology (specifically, 4,075), after adding 817 with the wind turbines connected to the grid in 2020, a figure only surpassed by Castilla y León (6,268 MW), a community that doubles in area to ours . The growth of this sector has been dazzling, since in two years the installed power to produce electricity with wind has doubled.
Green

The other great green energy, solar photovoltaic, has also climbed positions, which also marked a historical maximum in its deployment throughout the territory, with an extra 176 megawatts, which has already exceeded the thousand barrier for the first time. (1,115 MW). This data is dazzling if one takes into account that Aragon played a testimonial role in this technology only two years ago, with just 169 megawatts installed. Now it is the fifth largest generator after having multiplied the power almost by seven in less than 24 months. Ahead are the four regions of southern Spain (Andalusia, Extramadura, Castilla-La Macha and Murcia), a priori they are more conducive to the installation of these power plants.

Between both renewable energies, Aragón has connected 993 megawatts in the Spanish electricity system during 2020 – in the absence of accounting for the data for November and December -, which is equivalent to the electricity demand of some 800,000 homes. In this way, it is the second autonomous community that more green power put into service. The first was Extremadura, with 1,320 more MW, all of them photovoltaic. The progress made comes after a 2019 that was even more plentiful, with 1,931 megawatts put into service (1,161 from wind power and 769 from photovoltaic).

Thus, the community maintains a leadership position in the deployment of clean energy at the state level, while it has taken a giant step in the decarbonisation objectives with the closure of the Andorra thermal plant last summer. This is reflected in the electrical balance. The production of renewables (hydro, wind, photovoltaic and biomass) in Aragon has reached its historical maximum with 10,242 gigawatt hours (Gw / h) generated in the first ten months of 2020, which represents an increase of 58% (3,700 Gw / h more) compared to the same period of 2019. This volume of electricity of 100% green origin allows to broadly cover all the regional demand for electricity, which was 8,388 Gw / h between January and October. This indicator fell 7.1% in year-on-year terms and marked one of its lowest levels in decades due to the paralysis of the economy and restrictions in the first state of alarm.

Apart from the effect associated with the coronavirus, renewable generation was so abundant that it overwhelmingly exceeds (122%) the consumption of homes, businesses and companies in the community, thus accentuating its profile as an exporter of electricity.

Far from stagnating, the forecasts suggest that the growth of green energies will accelerate in the coming years. Red Eléctrica (REE) currently has 12,498 megawatts of renewable generation –which is equivalent to more than 12 gigawatts– with permission to access the network, of which 8,215 are for photovoltaic, 4,158 for wind and 125 for other technologies. with data up to December 31. Of these, 11,451 have a greater maturity as they also have connection authorization. To these figures must be added the requests for another 2,040 MW that are under study, which will be difficult to fit since most of the connection points are crowded. The flood of projects has been such that REE has denied permits for more than 20,000 megawatts.

The DGA has almost 11,000 more megawatts of sun and wind farm pending

The Government of Aragon has played a key role in the emergence of renewable energies and the leadership that the community had in recent years in this sector, having been more agile than other territories in the processing of projects. But the bureaucratic challenge remains in force, as times are pressing in this market and the volume of investments pending authorization continues to be huge. Of the 12,498 green megawatts that are being processed in the territory -with permission to access the network-, most (10,997) are managed by the DGA, which has 338 photovoltaic parks (7,635) and 98 wind farms (3,361) on the table . In order for them to become a reality, they must obtain the environmental impact statement before the summer of 2022, according to the new regulation of the central government.