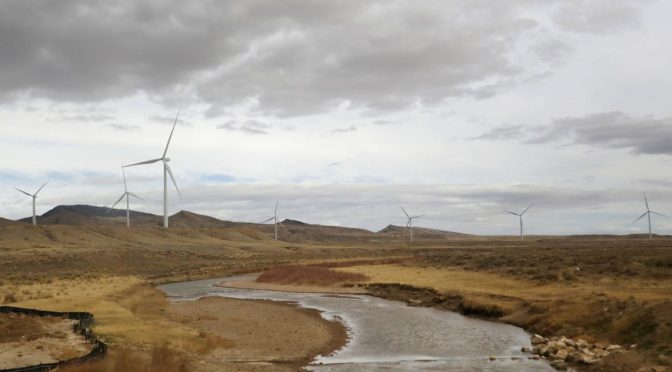 The wind energy sector in the U.S. shattered records in 2020, recording its biggest year yet in terms of new capacity added to the grid.

Last year, 16,913 megawatts of new wind power capacity was installed in the U.S. — an 85% increase compared to 2019. That’s according to a new quarterly report compiled by the American Clean Power Association on Thursday.

In 2020, the state installed 1,123 megawatts of wind power, nearly doubling its capacity.

A significant portion of the development was led by the state’s largest utility, Rocky Mountain Power.

As a majority of Wyoming counties reported dramatic declines in tax revenue, sales and use taxes poured into Carbon County last year, largely thanks to wind projects.

In the third quarter of 2020, Carbon County’s taxable sales jumped by 95%, compared to the year before. The increase in revenue could be traced back to the wind projects springing up across the county. In addition to the sales and use taxes, wind developers also pay property and electricity generation taxes.

“2020 was a banner year for the wind industry,” Heather Zichal, CEO of American Clean Power Association, said in a statement. “Despite all the challenges COVID-19 placed on our businesses, we still shattered nearly every record for capacity and growth. The fourth quarter was not only the strongest quarter on record, but it also saw more wind installed in just that quarter than in any full year in the modern industry’s 40 plus year history, except 2012.”

That said, energy experts have warned Wyoming shouldn’t take the burst in wind development for granted, or expect it to automatically grow year after year.

The Industrial Siting Council, the regulatory board charged with reviewing big wind project applications here, has not received a new proposal for a wind project since 2019.

Making Wyoming a favorable business environment for renewable energy development in the competitive Mountain West region, and reaching new markets outside the state, will be key.

The Decker coal mine has closed down. At the end of January, mining ceased at the Montana mine after the owner of the mine filed for bankruptcy late last year, according to court documents. Coal firm Lighthouse Resources owns the Decker mine just north of Wyoming’s border. A majority of the mine’s workers live in Wyoming. The parent company filed for Chapter 11 bankruptcy in December, citing dismal market conditions for coal.

Coal company Lighthouse Resources asked a federal court for approval to reject a collective bargaining agreement struck with its workers’ union. That would allow the coal company to shed its remaining pension and medical obligations promised to union employees.

The University of Wyoming’s School of Energy Resources held a virtual roundtable last week to weigh the possible consequences of the Biden administration’s executive orders, with three panelists admonishing the administration for slowing new drilling on public lands. In addition to generating uncertainty for the state’s energy sector, the executive actions could also compromise the state’s obstinate push to lead the nation in carbon capture and storage development, some panelists forecast.

Gov. Mark Gordon threw his weight behind several legislative proposals aimed at supporting Wyoming’s key economic drivers — energy, tourism and agriculture. In an announcement published Thursday, the governor outlined his economic plan to help the trio of industries regain their footing and recover from the recession. That included House Bill 11, a bill that would halve the state’s severance tax levied on oil and gas operators, under certain conditions.

A bill up for consideration in Wyoming’s Legislature proposes to exact an additional tax on utility-scale solar power facilities. House Bill 94 would levy a $1 tax on each megawatt hour of electricity produced from larger solar energy facilities in the Equality State. If passed into law, the tax would mirror one already exacted on wind energy facilities.