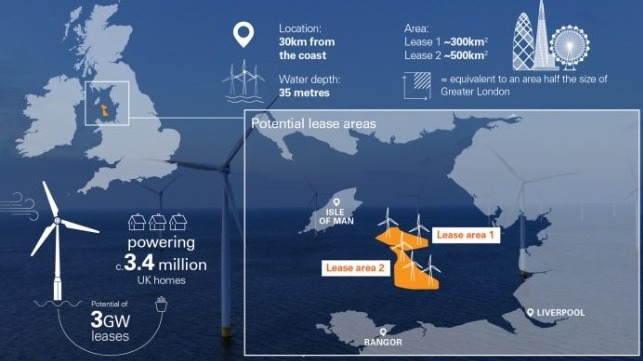 One of the proposed could be off the Northern Welsh Coast, North East of Anglesey. The bidder is a consortium of EnBW and BP. Areas pinpointed are between Holyhead and Rhyl.

Revealing details of the project, a spokesperson for the Crown Estate said: “The six Round Four projects together represent just under 8 GW of potential new offshore wind capacity with the opportunity to deliver clean electricity for more than seven million homes and create employment opportunities across the country.

“The projects have been selected through a competitive seabed tender process and will now progress to environmental assessment known as a Habitats Regulations Assessment (HRA).”

The project will support continued growth and investment in the UK offshore wind sector, which could employ as many as 60,000 people by 2030, up from about 11,000.

They will also help the UK save about 12.5 million tonnes of CO2 emissions a year and with 39 GW of offshore wind already in operation, construction and planning, projects emerging from Round 4 could deliver a 21 per cent increase in the pipeline, a major contribution to supporting the Government’s target of delivering 40GW by 2030.

Lesley Griffiths, Welsh Government Minister for Environment, Energy and Rural Affairs, said: “I am delighted to see an offshore wind project in the North Wales region progress to the next stage of The Crown Estate’s current offshore wind leasing auction round. I would like to thank all those involved for their efforts in reaching this stage of the process.”

“I would also like to congratulate the successful bidder. We at Welsh Government, with our partners in the region, look forward to working alongside them. It is vital that Wales maximises from the benefits of hosting offshore wind projects as well as the infrastructure they require onshore.

The projects and bidders that will progress to the next stage of Offshore Wind Leasing Round 4 (Picture: Crown Estate).

Through an open market process, successful bidders have committed an initial investment of £879m in option fee deposits.

A spokesperson for the Crown Estate said: This signals a significant vote of confidence in the UK’s world leading offshore wind sector and Government’s commitment to grow the low carbon economy.

“Following the conclusion of the Round Four process through the HRA, option fees will contribute to The Crown Estate’s annual profits, 100 per cent of which are paid to the Treasury for the benefit of the nation.”

Round Four projects will now progress to the next stage of the process known as a Plan-Level HRA. This process assesses the potential impacts of Round Four on the UK national network of protected areas covering its most valuable species and habitats.

It is a legal requirement, which must be completed before The Crown Estate can award seabed rights and is an important step in helping to preserve the UK’s precious marine environment.

The HRA process is expected to conclude in Spring 2022.

Subject to the outcome, developers would then be granted an Agreement for Lease by The Crown Estate and be able to progress projects through the planning process, in which stakeholders and local communities will have an opportunity to participate. The projects could begin to generate clean electricity by the end of the decade.

The new collection of wind turbines, expected to be between 51 and 107 depending on their size, would cover an area of 106km2 from Colwyn Bay to Conwy.