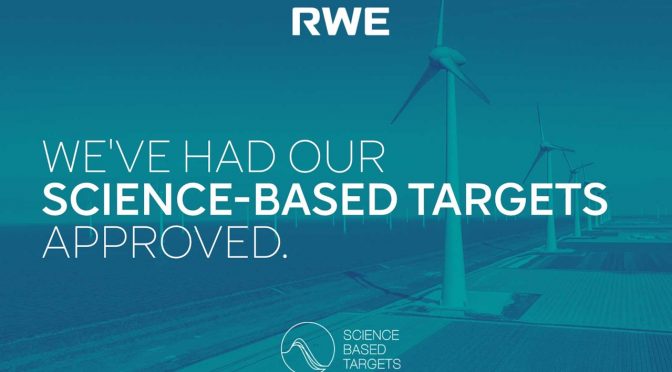 More than a year ago, RWE set itself a target – to be carbon neutral by 2040. Initially, this mainly focused on direct CO2 emissions from power generation.

Now, RWE has expanded this goal by extending its climate protection targets to all activities and greenhouse gas emissions of the Group. Specifically, this means that RWE has committed to achieving a 50% reduction in specific greenhouse gas emissions from Scope 1 and 2 by the year 2030, compared to the base year 2019. The company aims to reduce Scope 3 emissions by 30% by 2030.

These company-specific targets have now been the subject of a comprehensive review by the Science Based Targets initiative (SBTi), an independent initiative of the WWF, UN Global Compact, the World Resources Institute and CDP. Based on climate science, the SBTi has attested that RWE’s targets are in line with the Paris Agreement which aims to limit global warming to well below two degrees Celsius.

RWE is one of the few energy companies to have Science-based Targets for climate protection. Currently, about 500 companies worldwide have set themselves such scientifically verified targets, which align with the Paris Agreement. In accordance with the Agreement, made on 12 December 2015, 195 nations committed to limiting global warming to well below two degrees Celsius above pre-industrial levels.

RWE’s Science-based Targets are based on a climate footprint that was calculated for the year 2019. The company has a clearly defined roadmap for reductions in scope 1 and 2 emissions. In the UK, RWE’s last hard-coal power plant has already been taken off the grid, plants based in the Netherlands are currently being repurposed for biomass, and in Germany, RWE will shut down its last two hard-coal units by the end of this year. The exit from lignite generation will be implemented by 2038 at the latest, as set down in legislation, and the first plant will also be shut down by the end of December this year. To achieve the scope 3 targets, RWE will increasingly consider sustainability standards in the procurement process among other things. In collaboration with suppliers and partners, the company plans to leverage further reduction potential.

“Our climate change targets have now also been scientifically certified. We will be consistent in implementing our roadmap. At the same time, we are investing billions of euros in expanding our renewables portfolio and are pushing ahead with our activities in the area of green hydrogen. This is the key to supporting the sustainable transformation of the economy,” emphasises Rolf Martin Schmitz, CEO of RWE AG.

RWE is already one of the world’s leading companies in terms of renewables and number two globally in offshore wind. The company will be investing over five billion euros net in new wind and solar projects by the end of 2022. Together with partners, this amount could reach over nine billion euros. In addition, RWE is strongly involved in the area of hydrogen technology. Together with renowned partners from industry and the scientific world, RWE is pushing ahead with over 30 hydrogen projects in Germany, the Netherlands and the UK.

Details of RWE’s Science-based Targets can be accessed at rwe.com/emissions. Based on this, the company will report in detail on its direct and indirect greenhouse gas emissions according to scope 1 to 3 as of fiscal year 2020 onwards.

“RWE will be carbon neutral by 2040. In order to make this happen we have set ourselves additional ambitious targets for all activities that emit greenhouse gases. The renowned Science Based Targets initiative has now confirmed that our emissions reduction targets are in line with the Paris Agreement. The fact that we have now received this certification motivates us even more.”