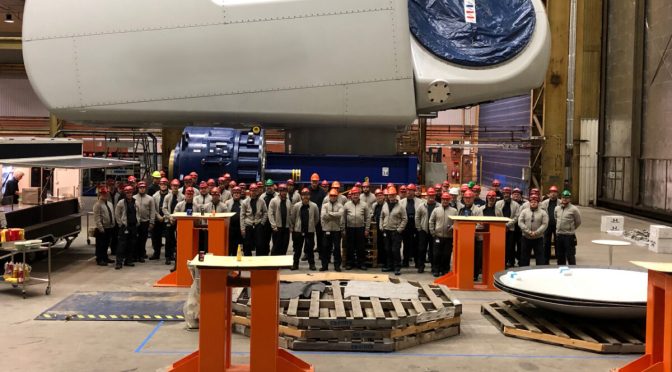 500th nacelle from MHI Vestas’ V164 turbine line has now been assembled and rolled out of the company’s Lindø facility in preparation for installation in UK waters.

In a major milestone for MHI Vestas Offshore Wind (MHI Vestas), the 500th V164 nacelle produced by the company at its facility in Lindø has now been assembled and rolled out of the facility in preparation for installation.

The 500th nacelle is among those being shipped to the UK for installation in 2021. One nacelle can supply over 6,000 Danish households with clean, renewable electricity.

MHI Vestas’ Lindø factory has been steadily producing V164 nacelles since 2014, and currently employs 455 people. The nacelle factory is among MHI Vestas’ three Danish manufacturing sites, along with its blade factory at Nakskov and power conversion module (PCM) factory at Esbjerg.

“We are delighted to mark this milestone, having assembled the 500th V164 nacelle at Lindø,” said Martin Bjerregaard, Lindø Factory Director at MHI Vestas. “Our 455 employees at Lindø can all be proud of their contribution to this achievement. After several years of producing V164 nacelles, I can safely say this is among the safest, most efficient and one of the most advanced nacelle assembly factories in the world. The 500th V164 nacelle is a symbol of that progress.”

The Lindø factory, built on the site of a former shipyard that was later occupied by Maersk, has become a major part of the local community. In the 6 years since MHI Vestas has occupied the site, the company has become the largest private employer in the area and primarily hires and trains local workers in offshore wind nacelle assembly methods.

The 500th V164 nacelle will now be prepared for transport to the UK on MHI Vestas’ purpose-built BoldWind vessel.