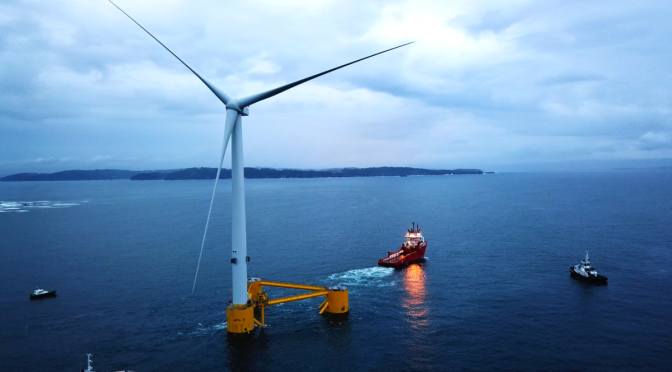 A new study launched today by EIT InnoEnergy shows that Spain and Portugal have unique competitive advantages and enormous potential for the region to become a leading global hub for floating offshore wind energy.
The study, entitled “Iberia as a hub for technology development and industrial leadership in the field of floating wind offshore energy”, has been commissioned to the independent consultancy Enzen and indicates that the development of this industry in the Iberian Peninsula during the next two decades would have a considerable socio-economic impact, creating up to 50,000 highly-qualified jobs (of which 60% would be direct and the rest indirect) and a business volume that could reach 5,000 million euros in annual turnover in 2030, with more than one third of export earnings.
The predictions of the leading international experts in the energy sector suggest that during this decade the global take-off of floating offshore wind will take place. It is a sector with enormous potential and in which the first to position themselves will have enormous competitive advantages and great possibilities to lead the market. For now, the most relevant regions are Europe, North America and Asia (China, Japan and Korea). But, from EIT InnoEnergy, aware of the competitive advantages of Spain and Portugal and also knowing many of the first players who are already promoting pioneering projects in this area, they have wanted to analyze the real potential of the Peninsula.
According to Mikel Lasa, CEO of EIT InnoEnergy Iberia, “The study data is very revealing and, therefore, we have already transferred it to the Spanish and Portuguese institutions that share our interest in the development of this promising sector in the Peninsula. At a time as complicated as the current one, the commitment to floating offshore wind is a unique opportunity to boost the economy and help the much-needed industrial reconversion of Spain and Portugal within the energy transformation ”.
Precisely, EIT InnoEnergy has a great vocation to stimulate innovation projects with public-private collaboration, both nationally and regionally. In fact, the plan to promote floating offshore wind is within a broader strategy of support and improvement of innovative sectors for which this organization has developed several projects that have been submitted to the Recovery Plan for Europe.
According to the main conclusions of this study, Iberia (Spain and Portugal) is in a very favorable disposition to compete and position itself as a world leader region in floating offshore wind as it has competitive advantages that are not easily replicable in other areas. For example, it has the potential to develop a domestic market in early stages, especially in island areas. There it is possible to test and develop technology and business models in order to quickly establish a competitive Iberian industry in foreign markets. It is estimated that, in the most ambitious scenario, Iberia could have 3GW of installed power in 2030 and 22 GW in
02