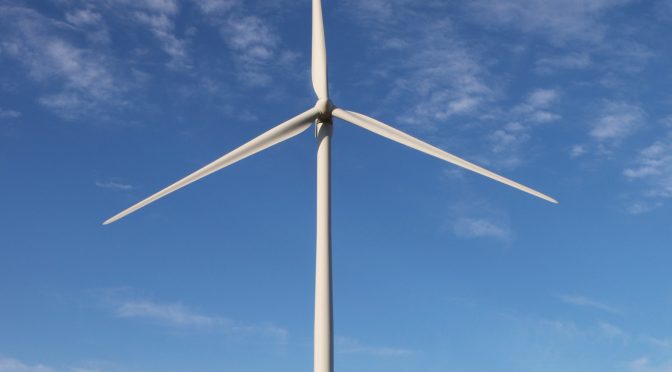 Giant wind turbines could soon be spinning atop a Botetourt County mountain, marking the state’s first use of onshore wind energy.

A permit for the long-delayed wind farm was recently approved by the Virginia Department of Environmental Quality, according to Apex Clean Energy, which plans to build up to 22 turbines as tall as 680 feet on a remote ridgeline.

“We are on track to start site preparation work this winter,” said Charlie Johnson, senior development manager for the company.

When completed, Rocky Forge Wind will produce enough electricity to power up to 21,000 homes at peak capacity. The 75-megawatt facility will convert wind to electricity and sell it to Dominion Energy, which has a contract to provide renewable energy to Virginia’s state government.

Wind turbines and solar panels are becoming more popular as part of a nationwide push to move away from polluting, fossil fuel-generated electricity.

Although Rocky Forge will be the state’s first ridgeline wind farm, two pilot turbines have already been built off the coast of Virginia Beach as part of a major offshore project. Long-term plans call for Virginia’s two largest utilities, Dominion and Appalachian Power Co., to be completely carbon-free by 2050.

Approval by DEQ was the last key hurdle for Apex, which says construction should be completed by the end of next year.

The wind farm was first proposed in 2015, and a series of local, state and federal permits were issued for a plan that called for 25 turbines no taller than 550 feet on North Mountain, in the northeastern corner of the county.

But construction never began as Apex searched for a customer for its green energy.

By the time a deal was struck last year with Virginia — which has a goal of using renewable sources for at least 30% of the electricity consumed by state agencies by 2022 — technological advances had changed the project.

Apex said it could build fewer turbines, but at a greater height. That required amended permits from the Botetourt County Board of Supervisors, the Federal Aviation Administration and DEQ.

The Charlottesville company is finalizing plans on what type of turbine to use, which will determine the exact number and size, company spokeswoman Natasha Montague said.

With more efficient turbines, the project’s site plan will be about 120 acres, a 40% reduction from the original concept, Apex said in an application submitted to DEQ in August.

Rocky Forge will be built on a 7,000-acre tract of woodlands that is largely isolated from homes and businesses, about 5 miles northeast of Eagle Rock. The turbines — which will be about as tall as a 50-story building — will be spaced evenly along a 3.5-mile segment of the ridgeline.

Opponents have said the giant windmills would be an eyesore, endanger wildlife, make too much noise and produce disruptive shadow flickers on the surrounding landscape.

After a contentious four-hour meeting in May, the board of supervisors voted 3-2 to allow the taller turbines.

DEQ offered a second opportunity for public comments over the summer. Of the 70 comments submitted, 51 were supportive of the project, according to Apex’s application.

The environmental agency’s most recent approval comes with the same conditions that it imposed in 2016 to protect bats, which it found could fly into the spinning blades. Apex agreed to turn the turbines off at night during the warmer months, when bats are most active.
By Laurence Hammack The Roanoke Times