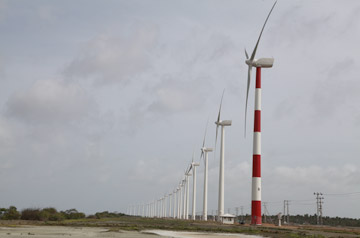 Addressing the cabinet media briefing, he said that once completed, the wind power plant would add 120 MW of power to the national grid. 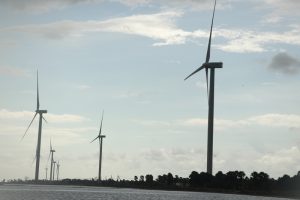 “The power plant is being constructed on a grant of $ 200 million received by Sri Lanka. However, following the completion of 100 MW, it is now identified that out of the $ 200 million, $ 47 million is left and therefore it has been decided to produce additional 20 MW of power by using six turbines,” Gammanpila said.

The Mannar Wind Power Project, which is at least a year behind its schedule, will add 100 MW to the national grid by the end of this year, according to the Ministry of Power.

As learnt by The Sunday Morning, the Ceylon Electricity Board (CEB) has incurred millions of rupees due to the delay in commissioning the wind power project.

The contract has been awarded by the CEB to Vestas Asia Pacific AS, a world-renowned Danish wind turbine manufacturer, to build the first large-scale wind farm in Sri Lanka in the southern coast of Mannar Island.

The project comprises 30 state-of-the-art wind turbines, each rated to 3.45 MW. The total installed capacity of this wind farm is 103.5 MW.

The Mannar Wind Power Project recently completed the final main gravity foundation along with the erection of the 10th wind turbine. The primary contractor, Vestas Asia Pacific, along with their specialist civil engineering contractor, Access Engineering PLC, has achieved satisfactory progress amidst challenging conditions of the Covid-19 pandemic.

The project work commenced in March 2019.