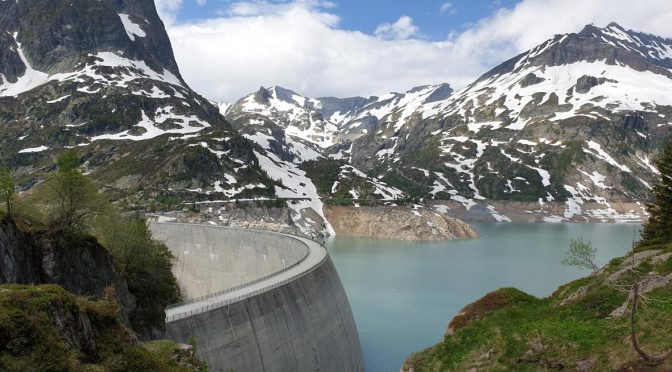 Two crystal-clear blue lakes in the Swiss canton of Valais, Lac d’Emosson and Lac du Vieux Emosson, look at first glance like any number of local glacier-fed tarns, surrounded by mountains and crystalline air blowing down the slopes of nearby Mont Blanc. But first impressions can be misleading: The twin bodies of water are central components of Nant de Drance, one of the world’s most ingenious batteries, which entered commissioning phase in August.

Such projects, known as pumped storage plants because they store electricity as water’s potential energy by pumping it uphill, are becoming increasingly important as countries start including ever more renewables in their energy mixes. Renewables are intermittent — plentiful only when the sun is shining and the wind is blowing — so to completely replace fossil fuels, they’ll need to be able to meet energy demands around the clock and maintain the grid’s delicate balance of supply and demand.

That’s where batteries like Nant de Drance come in. The plant generates power by releasing water through a waterway from Lac du Vieux Emosson to Lac d’Emosson, located roughly 1,100 feet below. Pulled down by gravity, the rushing water spins turbines that produce electricity. When the grid has too much electricity — say, on a windy summer weekend when people are off work and factories are closed — the plant soaks up the extra power by reversing the process and pumping water uphill back to the upper reservoir. There it can be stored until shops and plants open up for business when the workweek starts.

The idea of using a lake as a battery by pumping water into it dates as far back as the late 19th century. But Nant de Drance puts a new twist on this theme, showing how the latest technology can play a central role in the push toward renewable energy on the grid. All pumped storage plants can control how much energy they feed into the grid at any given moment by adjusting the flow of water down the hill. But unlike conventional pumped storage plants where the power of each pump can’t be adjusted, Nant de Drance’s variable-speed pump-turbines and motor-generators allow perators to pump precisely the amount of energy the electrical grid wants to offload, so the region’s wind and solar power aren’t wasted — on the contrary, they’re highly valorized. In addition to making the grid more efficient, the variable-speed machines are themselves more efficient than their fixed-speed cousins, capturing more potential energy when producing power and using less electricity to pump uphill.

The Nant de Drance project required a powerful amount of civil engineering, including a cathedral-lake turbine chamber built into the Alpine massif. Top and above image credits: GE Renewable Energy.

Because Nant de Drance will be both pumping and generating power on a frequent basis, it needs to be fast — and it is. While a coal-fired power plant takes more than four hours to start up, and a combined-cycle gas turbine two to three hours, Nant de Drance’s pump-turbines can start churning out 900 megawatts in just 100 seconds. When the grid suddenly has more power than it needs, Nant de Drance can react almost as quickly, taking six minutes to go from producing power to pumping water back uphill to the Vieux Emosson reservoir.

“It’s not a power plant — it’s really a switch,” says GE project director Fabien Scheurer. The scale of this Alpine battery also makes it a powerful tool for leveling the peaks and valleys created by intermittent renewable energy. When full, the Vieux Emosson reservoir can provide around 18 gigawatt-hours of electricity.

Getting the plant over the finish line took extra work as the COVID-19 pandemic settled over Europe in mid-March. Scheurer’s crew of several hundred people came from all over the continent. Before the pandemic, most of them commuted to the construction site for the week, returning home across international borders on weekends. (France is just a few switchbacks away, and Italy is also close by.) But with new restrictions in place, returning home could mean being quarantined and away from the work site for weeks. “Everybody realized it’s safer if we stay like a big family at the site rather than going all over the place,” Scheurer recalls.

The crew hunkered down in apartments and hotel rooms in a town below the lower dam and called home during weeknights, while Scheurer and his officers sought out disinfectant, masks and other equipment. One hundred and thirty people ended up living at the site for 10 weeks in a kind of COVID-19 bubble. “It was stressful. The whole team managed that with all the pressure to get to the first turn of unit one,” Scheurer says. “I’m as proud of that as of exporting the power.”

In September, the second pump turbine at the Nant de Drance power plant was connected to the grid for the first time. “This process went smoothly and marks another major step in the current test phase,” says Eric Wuilloud, director of Nant de Drance SA. In August, Nant de Drance SA and GE set up an integrated team allowing several units to be progressively synchronized and tested in parallel, which requires perfect coordination of these complex operations.

With two units online, Scheurer and his team have about a year of work left to go before all six units are up and running, he says. Most of the project’s 12 years and $2.1 billion in investment have been devoted to massive civil engineering work like the 17 kilometers of underground caverns plus 5 kilometers of subterranean waterways, including vertical shafts for the water that are taller than the Eiffel Tower. Inside the Alpine massif, construction crews also built a cavernous, cathedral-like turbine chamber two football fields in length. GE is responsible for almost all of the power plant equipment — pump-turbines, motor-generators, inverters, piping and the like.

“Nant de Drance is a major project for GE,” says Fergus Brady, GE Hydro Solutions general manager for Europe. “Our project team have proved their commitment to delivering despite the many challenges faced, not least COVID-19.”

Energy markets have changed radically during the project’s long construction, notes Scheurer, with more renewables online and increased demand to store the energy. With 80 to 100 years of life, he’s confident Nant de Drance will pay off for its owners and Swiss consumers.

For Scheurer, turning on the first unit in August was a career highlight.

“I’ve been 25 years in this business,” he says. “When you see the power you can get and in such a fast time, it’s impressive.”