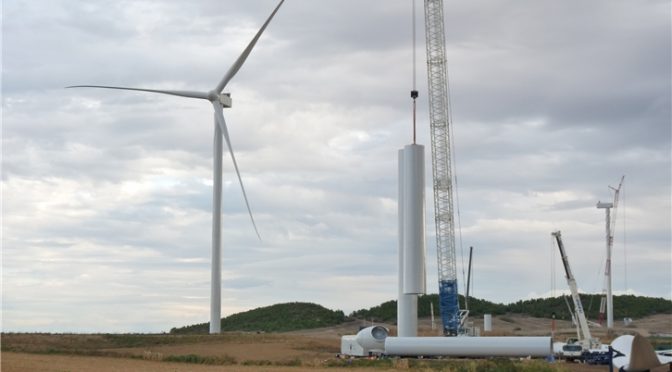 The Serralta wind farm, located in Cabanillas, plans to renew its wind turbines in the coming years to increase energy production by 30% and reduce CO2 emissions. The ultimate goal is to reduce the 51 wind turbines currently installed to a maximum of 9. The Department of Economic and Business Development has already authorized the project, which can be considered the first major repowering action in Navarra.

The park, inaugurated in 1998, was one of the first in Navarra. Hence, the need to adapt the park to new emerging technologies, with machines of greater capacity and performance, that meet the requirements of grid integration and allow greater use of the wind resource, has been raised.
With this objective, the Enhol company, the entity that owns the wind farm, has begun the renovation of the wind turbines, with one manufactured by the Nordex-Acciona company, from Pamplona. The new equipment, model N155, will have an installed unit power of 4,500 kW. In return, six wind turbines will be removed from the park (one MTorres TWT-1500 wind turbine and five existing ECO-44 wind turbines), as stated in the file processed by the Industrial Planning, Energy Infrastructure and Mines Service.

Through these modifications, the park will increase energy production by up to 30%, but starting from the same installed power, which remains unchanged at 16,500 kW. In addition, the same existing electrical infrastructures will be used, both the evacuation line and the substation.

All this will make it possible to reduce the tons of CO2 emissions and also the visual impact of the park, since after the repowering work, the installed wind turbines will be a fifth of the currently existing ones. Older wind farms are generally ideal candidates for these actions, since the cost of operation and maintenance is higher than that of recently built wind farms.

The request of Eólica Cabanillas, S.L.U. it was submitted to the public information process through an announcement in the Official Gazette of Navarra No. 199 and in the press in October 2019, as well as on the Open Government of the Government of Navarra website.

Through Resolution 86E / 2020, of June 19, of the Director of the Territory and Landscape Service, the project was granted authorization on undeveloped land. Through Resolution 664E / 2020, of August 10, of the General Director of the Environment, a favorable Environmental Impact Statement was formulated. Finally, and by means of Resolution 79/2020, September 18, of the General Director of Industry, Energy and Strategic Projects S3, prior administrative authorization, administrative construction authorization and a specific declaration of public utility have been granted to the project.
All these actions are part of the Navarra Horizonte 2030 Energy Plan, in which wind energy is one of the fundamental axes. In this line of action, Navarra is considering the implementation and repowering of wind farms in the Autonomous Community, respecting environmental criteria. This repowering will contemplate the alternatives of machine changes and the total change of parks (structures, machines, etc.).

In accordance with the Preliminary Draft Regional Law on Climate Change and energy model transition, regarding the promotion of renewable energies, wind facilities will be promoted, among others, and investment projects in renewable energies will be declared of regional interest. consider the repowering of wind farms.