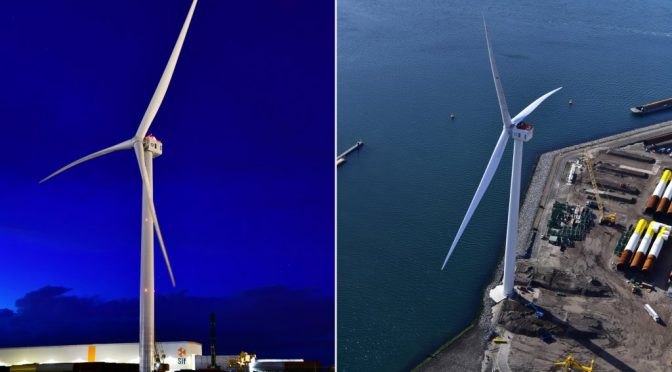 The contract award, which is subject to Dogger Bank A and B reaching Financial Close, includes an order for 190 Haliade-X 13MW offshore wind turbines to be installed off the north-east coast of England, split evenly at 95 turbines for each of the first two phases of Dogger Bank Wind Farm.

The installation of these turbines will be the first time ever a 13MW Haliade-X is installed in the world. One spin of the Haliade-X 13MW can generate enough electricity to power a UK household for more than two days.

As part of the agreement GE Renewable Energy will establish its marshaling harbour activities at Able Seaton Port in Hartlepool which will serve as the base for turbine service equipment, installation and commissioning activities for Dogger Bank A and B.

This will see the delivery of component parts for each of GE’s Haliade-X 13MW wind turbines to the specialist port, including the nacelle, three tower sections and three 107m long blades, for pre-assembly on-site at Able Seaton prior to transport out to the North Sea for installation. This activity will lead to the creation of 120 skilled jobs at the port during construction. Turbine installation is expected to commence in 2023 at Dogger Bank A.

Today’s contract announcement also includes a five-year Service and Warranty agreement supporting operational jobs in the maintenance of the wind farm. This agreement for Dogger Bank phases A and B will account for around 120 out of the total 200 long term jobs (previously announced) that will be based out of the Port of Tyne where the wind farm’s new Operations and Maintenance base will be located. GE’s Service team will be co-located with the Dogger Bank Operational and Maintenance team at Port of Tyne.

This brings the total number of jobs in the North East associated with the development and operation of Dogger Bank Wind Farm to 320 so far.

Recruitment activity is expected to begin in early 2021, and job roles will be advertised closer to the time by GE and by Dogger Bank via the Dogger Bank website and social media channels.

Dogger Bank Wind Farm is a joint venture between SSE Renewables, who are leading the construction of the wind farm, and Equinor, who will operate the 3.6GW project during its lifetime of at least 25-years.

The project is located over 130km off England’s north-east coast and will be capable of powering up to 4.5 UK million homes each year when complete in 2026. Due to its size and scale, the site is being built in three consecutive phases; Dogger Bank A, Dogger Bank B and Dogger Bank C. Each project is expected to generate around 6TWh of electricity annually.

Energy Minister Kwasi Kwarteng said: “I am thrilled to see so many green jobs on the way to the North East of England thanks to our world-leading offshore wind industry.

“Projects like Dogger Bank are absolutely crucial to building back greener from the coronavirus pandemic – creating jobs, growing the economy and tackling climate change. I look forward to watching its progress in the months and years ahead.”

Steve Wilson, Dogger Bank Wind Farm’s Project Director at SSE Renewables, said: “Signing the contract with GE Renewable Energy is not just great news for Dogger Bank and GE, but for the wider offshore wind industry, marking the first time a 13MW turbine will be installed in the world.

“In addition to this, today’s announcement will bring huge economic benefits to the North East of England, where 120 skilled jobs will be created during construction of the windfarm, along with 120 skilled jobs during the maintenance phase.

“These turbines are a true testament of how hard the offshore wind industry is working to continually innovate and drive down costs and we look forward to working with GE Renewable Energy to help us deliver the largest offshore wind farm in the world.”

Peter Stephenson, ABLE UK’s Executive Chairman, commented: “We have enjoyed a long and constructive relationship with GE Renewable Energy culminating in today’s announcement – it’s a massive vote of confidence for the company and the UK. Our sustained investment at Able Seaton Port means we can provide a bespoke and tailor-made solution for Dogger Bank.

“We are delighted that 120 skilled jobs will be based here at the Port, in this exciting and growing industry. The offshore wind sector will increase four-fold by 2030 through the Sector Deal, and with the increasingly demanding targets for low carbon power generation, there is an unparalleled level of market visibility. Combine this with the sectors’ extraordinary efforts in terms of developing new products and significantly reducing costs, this industry is set to become a dominant factor in a post Covid 19 UK economy.”

The Haliade-X 13MW turbine is an enhanced version of the successful 12MW prototype unit which has been generating power in Rotterdam since November 2019 and recently secured its provisional type certificate* from DNV-GL. This prototype unit, which set a world record in January 2020 by being the first wind turbine to produce 288MWh in one day, will start operating at 13MW in the coming months as part of its ongoing testing and certification process. The uprated 13MW Haliade-X will continue to feature 107-meter long blades and a 220-meter rotor.

John Lavelle, President & CEO, Offshore Wind at GE Renewable Energy, said: “We are delighted to take the next step in developing the most advanced proven technology in the market. At GE, innovation is in our DNA, and that is why we continue to innovate, enhance and develop the Haliade-X platform to meet market demands to deliver offshore wind as a competitive and affordable source of renewable energy. In signing these orders with Dogger Bank, our Haliade-X technology will now have an important role to play in the UK’s offshore wind ambitions (40GW by 2030) and greenhouse emission reduction to “net-zero” by 2050.”

Halfdan Brustad, vice president for Dogger Bank at Equinor, said: “We want Dogger Bank to be a flagship project that leads the way in both digitalisation and innovative technology, so it is a great honour to confirm that this project will be the first in the world to use these powerful wind turbines.

“The sheer scale of Dogger Bank brings huge opportunities to the UK. As well as being home to the world’s largest offshore wind farm, the North East will benefit from hundreds of jobs and local supply chain opportunities. We look forward to working with our partners and suppliers to build up a skilled team in the area, to operate and maintain these turbines for the lifetime of the wind farm, from our new base which will be constructed at the Port of Tyne.”

Dogger Bank Wind Farm and its appointed Tier 1 Contractors are committed to supporting the development and growth of a competitive UK supply chain and are holding a series of “Meet the Buyer” webinars throughout September. The events are free to attend and will give businesses of all sizes, across a wide range of disciplines, a chance to meet with the Dogger Bank project team and Tier 1 contractors to explore opportunities to provide products and services to the world’s biggest offshore wind construction project.

Today’s news follows last year’s announcement naming GE as the preferred turbine supplier for Dogger Bank Wind Farm A and B. This contract with GE Renewable Energy is subject to joint venture partners SSE Renewables and Equinor reaching Financial Close on Dogger Bank A and Dogger Bank B, expected in late 2020.

About the wind turbines

Able Seaton Port (ASP) is a 51 hectare (126 acre) site and has some of the strongest quays in Europe which have been constructed particularly to suit the requirements of the offshore energy sector.

ASP has the capacity to handle virtually all offshore vessels that are operating in the North Sea. ASP has large mobile harbour and crawler cranes already available along with self-propelled mobile transporters (SPMTs) and other plant and equipment to handle offshore wind components.

SSE Renewables is a leading developer, owner and operator of renewable energy across the UK and Ireland, with a portfolio of around 4GW of onshore wind, offshore wind and hydro. Part of the FTSE-listed SSE plc, its strategy is to drive the transition to a net zero future through the world class development, construction and operation of renewable energy assets.

Its operational offshore wind portfolio consists of 487MW across two offshore joint venture sites, Beatrice and Greater Gabbard, both of which it operates on behalf of its asset partners. SSE Renewables has the largest offshore wind development pipeline in the UK and Ireland at over 6GW and has an onshore wind pipeline across both markets in excess of 1GW.

Equinor has been operating in the UK for over 35 years. Headquartered in Norway, the company employs 22,000 people globally, and over 650 in the UK. As a broad energy company, Equinor is committed to long term value creation in a low carbon future, and targeting carbon neutral operations globally by 2030.

Equinor is the UK’s leading energy provider and supports the UK economy by investing billions in crucial energy infrastructure, working with over 700 suppliers across the country. Its energy supplies from Norway meet more than one quarter of the UK’s demand for natural gas and around one fifth of its demand for oil, both produced with one of the lowest carbon footprints in the industry. It operates the Mariner oil field, one of the largest and most digitally advanced offshore investments in the UK over the last decade, and is progressing Rosebank, the largest undeveloped field in the UK.

Both projects support hundreds of jobs and economic activity in Scotland. Equinor also operates two offshore wind farms off the East Coast of England, Dudgeon and Sheringham Shoal. It is a pioneer in floating wind technology with Hywind Scotland, the world’s first floating wind farm off the coast of Peterhead, which is partnered with Batwind, the world’s first battery for offshore wind. And with its partner SSE Renewables, Equinor is building the largest offshore wind farm in the world, Dogger Bank, off the North East coast of England. It is also a leader in both carbon capture utilisation and storage (CCUS) and hydrogen, and is developing a number of projects in Europe, including in the Humber and Teesside regions of North East England.