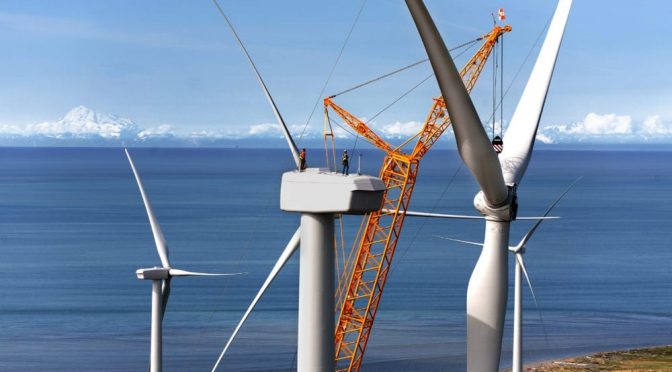 Fresh off AWEA’s celebration of American Wind Week 2020 in August, today marks both the beginning of National Clean Energy Week (NCEW) and Climate Week NYC.  Established in 2017, NCEW is a nonpartisan week of virtual activities that highlights the value and benefits of clean energy for families and businesses across America.  This year’s NCEW theme, “Clean Energy Solutions for a Stronger America,” speaks to the tremendous opportunity clean energy brings as our nation faces unprecedented economic disruption.

Climate Week NYC is an annual, international climate summit that has taken place in New York City since 2009.  This year, Climate Week NYC will explore what lessons we can learn in pursuit of a net-zero future through just transition, with a “Clean Energy Transition” as one of the program’s top themes.

U.S. wind power plays an important role in diversifying America’s energy portfolio, and provides affordable, reliable electricity for millions of Americans.  As we kick off both NCEW and Climate Week NYC and their discussion of common-sense solutions to support economic recovery, here are six things you need to know about wind energy:

1. Wind is Now the Country’s Largest Source of Renewable Energy

The “Wind Belt,” which stretches from Texas up through the Dakotas, leads the way.U.S. wind energy provides over 20 percent of the electricity produced in six states – Iowa, Kansas, Maine, North Dakota, Oklahoma, and South Dakota. In Iowa and Kansas, wind is the largest source of electricity.

U.S. offshore wind power is also set to take off within the next decade. America’s shores possess world-class wind resources that represent a once-in-a-generation economic opportunity. AWEA’s U.S. Offshore Wind Power Economic Impact Assessment finds offshore wind will attract $57 billion investment into the U.S. economy and deliver up to 83,000 well-paying U.S. jobs by 2030. Continued land-based wind growth and the development of U.S. offshore wind are exactly the types of clean energy opportunities to take advantage of to boost the nation’s economic recovery.

U.S. wind energy now supports 120,000 well-paying American jobs, and the clean energy career talent pipeline and opportunities are vast. According to the U.S. Bureau of Labor and Statistics, wind technician and solar PV installers are the two fastest-growing careers in the country.  In fact, BLS forecasts show that employment is expected to climb 56.9 percent for wind techs and 63.3 percent for solar installers during the next decade.

With a 50-state footprint, the essential wind workforce is on the front lines keeping the lights on at homes, hospitals, and grocery stores every day as the country continues to navigate challenging times. From wind technicians, engineers, project developers, construction workers, marketing, human resources, and finance staff, the wind workforce is ensuring our nation’s necessary electricity needs are being met.

Companies across the country are increasingly investing in clean energy resources to power their businesses and operations.  As companies strive to meet sustainability targets and improve bottom lines, the U.S. wind market is increasingly attractive to corporate buyers and represents a large opportunity for future growth. AWEA’s Wind Powers American Business report shows that corporations bought a record amount of wind energy last year as more brands have recognized that wind is an affordable, reliable option to power their businesses.  To date, corporate buyers have contracted nearly 17,000 megawatts of wind energy, and 10 percent of operating U.S. wind capacity is now purchased by corporate customers.

Another key reason for corporate interest in wind energy: American consumers care what powers the businesses they give their brand loyalty to. Overall, 88 percent of voters want to shop, dine, and purchase from brands that they believe are good corporate citizens, according to a national survey conducted by Public Opinion Strategies earlier this year.

6. Support for Wind Energy and Other Renewable Energy Sources is Bipartisan

The U.S. wind industry’s footprint spans across 70 percent of all U.S. Congressional districts, including 77 percent of Republican districts and 62 percent of Democratic districts. These districts either have at least one wind turbine, one wind-related manufacturing facility, or both.

Among American voters, there is bipartisan agreement that wind energy is a clean, renewable, affordable power source that also reduces carbon emissions. According to a Pew Research poll, 79 percent of Americans say the priority for America’s energy supply should be development of alternative sources like wind and solar. Additionally, a July 2020 consumer survey conducted online in the U.S. by The Harris Poll showed that 86 percent of Americans think the U.S. should put more emphasis on using clean, renewable wind energy.  Polling has also shown that more than 80 percent of the nation’s voters, regardless of political party and demographic, favor adding more offshore wind to America’s energy portfolio.

As Congress continues to craft its next recovery package for the U.S. economy, it must remember to include policies that will support America’s clean energy sector. Congressional support will preserve thousands of jobs for our country’s energy workforce and save critical revenue to states and host communities.  Smart energy policies will help foster renewable energy’s potential, build a stronger America, and will keep the clean power momentum moving.

To learn more about National Clean Energy Week, visit https://nationalcleanenergyweek.org/.  Join in on and follow the conversation on social media using the hashtags: #CleanEnergyWeek and #NCEW20.

To learn more about Climate Week NYC, visit https://www.climateweeknyc.org/. Watch the public sessions on the event Facebook page and follow the conversation on social media using the hashtag #ClimateWeekNYC.