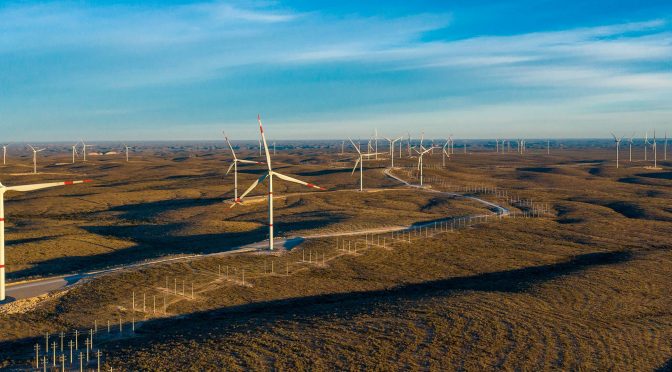 The 274 MW Dolores wind farm, located in China, Nuevo Leon, involved an investment of approximately 290 million dollars for its construction.
Dolores is supported by a contract that stipulates the sale of wind energy to CENACE.

Enel Green Power México (“EGPM”) has completed the installation of the wind turbines and pre-operational tests are underway at the 274 MW Dolores wind farm, Enel’s largest individual wind farm in Mexico. Located in the municipality of China, Nuevo Leon, the park represents the company’s first project in this state. The overall investment in the construction of Dolores amounts to approx. 290 million US dollars and will be able to generate up to 938 GWh annually, avoiding the emission of over 525,000 tons of CO2 per year.

Installation works have been completed on the wind farm’s 83 latest-generation wind turbines, as well as the park’s substation. Furthermore, the energization of the park was carried out successfully and it is in the last stage to complete the pre-operational tests, helping to ensure the reliability of the National Electric System.

“The installation of Dolores’s full capacity demonstrates once again Enel Green Power’s commitment to develop sustainable projects that provide economic value and environmental benefits not only to Mexico’s National Electric System, but also to all social groups involved in the project,” said Paolo Romanacci, Country Manager for Enel Green Power México. “With the energization of this project, we are introducing innovative and reliable technologies that seek to contribute to the economic reactivation of the country while contributing to its pursuit of the UN Sustainable Development Goals and the targets outlined in the Paris Agreement.”

Dolores, awarded in the third long-term auction in November 2017, is backed by a contract for the sale of specific volumes of energy to the Clearing House of the Mexican Center for Energy Control (CENACE) for a period of 15 years and clean energy certificates for 20 years.

The construction of Dolores was based on Enel’s “Sustainable Construction Site” model, which includes measuring the project’s socio-environmental impact and actions aimed at incorporating the rational use of resources, such as water management and recycling of waste. Other initiatives included the reuse of wood from the site to produce eco-friendly furniture and shipping containers for use by the local community. In addition, the project promoted the creation of approximately 400 direct and indirect jobs, mostly in towns near the park, benefiting of the regional economy. Among these are the rehabilitation of 27 kilometers of road between the towns of El Hueso and Pobladores, as well as the donation of a transport unit for the transportation of sports teams representing China.

Enel Green Power is closely monitoring the status of the COVID-19 pandemic in Mexico and is acting to protect the health of its workers and the community where it operates. In the country, the company has enacted strict travel and social distancing guidelines, intensified the cleaning of offices, generation plants and construction sites, including Dolores; and implemented different procedures and operational control protocols within its spaces, in order to reduce and mitigate the risk of contagion among workers. Likewise, the company donated masks, splitters and respiratory aid masks to the Regional General Hospital No. 270 Reynosa, as a measure of support to medical personnel and patients for the contingency. Within the park, drills were carried out with the contractors in order to define the protocols to follow in the event of a suspected case of contagion. A Ground Zero was prepared in the park, for the temporary location and medical review of these cases and their subsequent transfer to a medical center.

Enel Green Power, within the Enel Group, is dedicated to the development and operation of renewables across the world, with a presence in Europe, the Americas, Asia, Africa and Oceania. Enel Green Power is a global leader in the green energy sector with an installed capacity of around 46.4 GW across a generation mix that includes wind, solar, geothermal and hydropower, and is at the forefront of integrating innovative technologies into renewable power plants.